Roy Lisker (remember him from the Mormoiron post?) has written up his Grothendieck-quest(s), available for just 23$, and with this strange blurb-text:

“The author organized a committee to search for him that led to his discovery, in good health and busily at work, in September, 1996. This committee has since become the Grothendieck Biography Project. All of this is recorded in a 300 page account in 3 parts.”

Probably he refers to the trip made by Leila Schneps and Pierre Lochak, nicely described in Sam Leith’s The Einstein of maths:

“One of the last members of the mathematical establishment to come into contact with him was Leila Schneps. Through a series of coincidences, she and her future husband, Pierre Lochak, learned from a market trader in the town he left in 1991 that ‘the crazy mathematician’ had turned up in another town in the Pyrenees. Schneps and Lochak in due course staked out the marketplace of the town, carrying an out-of-date photograph of Grothendieck, and waited for the greatest mathematician of the 20th century to show up in search of beansprouts.

‘We spent all morning there in the market. And then there he was.’ Were they not worried he’d run away? ‘We were scared. We didn’t know what would happen. But he was really, really nice. He said he didn’t want to be found, but he was friendly. We told him that one of his conjectures had been proved. He had no idea. He’d stopped being interested in maths at that stage. He thought his unpublished work would all have been long forgotten.’” 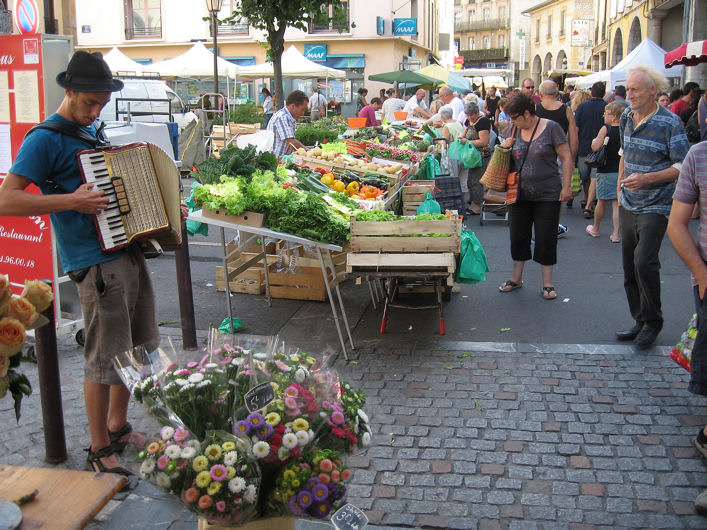 To city-cats this may seem an improbable coincidence, but if you live in the French mountains for some time, you learn to group your shoppings, and do them on market-days. The nearest market-town, where you can find a decent ‘boulangerie’ or supermarket, may be just 20 kms down the road, but it’ll take you close to an hour to get there.

If you sit near the town-fountain on market-days, for some weeks, you will have seen most of the people living in the vast neighborhood.

One of the nicer talks on the life of Grothendieck was given by Winfried Scharlau (who also has two books on offer on Grothendieck’s life, seems to become an emerging bisiness …) at the IHES Grothendieck colloque.

This video is stuffed with unknown (at least to me) pictures of Grothendieck, his places at Mormoiron and Villecun and of his four children still living in France. Highly recommended!

But, the lecture has a very, very strange ending.

At 1hr 06.51 into the video he shows the slide reproduced on the left below and says: “Okay and here’s a picture on which I will not further comment. That’s the last thing I want to show you. I thank you very much for your patience.”

Leila Schneps has a page with pictures on her website, including 3 pictures of her house, and then the one on the right above, merely described as ‘Another house’.

And then there’s this paragraph from Roy Lisker’s (him again) Travelogue-France (March 8-April 5, 2005) part 2

“I left the IHP around 11 to return to the CNRS research center at 175 rue du Chevaleret. Pierre Lochak and I discussed the possibility of my going to the town of St. Giron outside of Toulouse to make another impromptu visit to La Maison d’Alexandre Grothendieck.”

So, here we have three founding members of the Grothendieck circle linking publicly to the same picture of that one place they want to keep secret at all cost?

If you followed this series at all and have looked at the pictures of Grothendieck’s houses in Mormoiron or Villecun it is hard to imagine him living in a bourgeois-house, dating from the end of the 19th century, in a medium-sized market-town.

Still, it is quite likely that the picture is indeed taken in Saint-Girons, on some saturday in 1996 when Leila and Pierre bumped into Grothendieck on the market in Saint-Girons.

After all, Saint-Girons is the market-town closest to the final Grothendieck-spot…

Added after Grothendieck’s death on november 13th 2014: Here I got things wrong. For example, from the article La vie secrète d’un génie des maths à Lasserre it is clear that ‘another house’ is indeed Grothendieck’s last house, and it is not situated in Saint-Girons, but in the nearby village Lasserre.