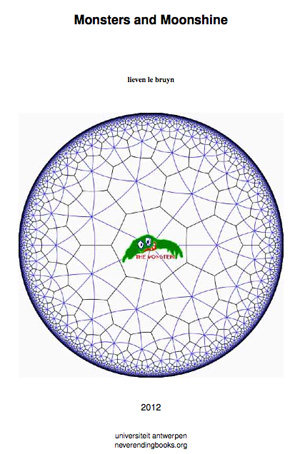 The $24$ ‘Monsters’ posts are (mostly) about finite simple (sporadic) groups : we start with the Scottish solids (hoax?), move on to the 14-15 game groupoid and a new Conway $M_{13}$-sliding game which uses the sporadic Mathieu group $M_{12}$. This Mathieu group appears in musical compositions of Olivier Messiaen and it can be used also to get a winning strategy of ‘mathematical blackjack’. We discuss Galois’ last letter and the simple groups $L_2(5),L_2(7)$ and $L_2(11)$ as well as other Arnold ‘trinities’. We relate these groups to the Klein quartic and the newly discovered ‘buckyball’-curve. Next we investigate the history of the Leech lattice and link to online games based on the Mathieu-groups and Conway’s dotto group. Finally, preparing for moonshine, we discover what the largest sporadic simple group, the Monster-group, sees of the modular group.

The $24$ ‘Moonshine’ posts begin with the history of the Dedekind (or Klein?) tessellation of the upper half plane, useful to determine fundamental domains of subgroups of the modular group $PSL_2(\mathbb{Z})$. We investigate Grothendieck’s theory of ‘dessins d’enfants’ and learn how modular quilts classify the finite index subgroups of the modular group. We find generators of such groups using Farey codes and use those to give a series of simple groups including as special members $L_2(5)$ and the Mathieu-sporadics $M_{12}$ and $M_{24}$ : the ‘iguanodon’-groups. Then we move to McKay-Thompson series and an Easter-day joke pulled by John McKay. Apart from the ‘usual’ monstrous moonshine conjectures (proved by Borcherds) John McKay also observed a strange appearance of $E(8)$ in connection with multiplications of involutions in the Monster-group. We explain Conway’s ‘big picture’ which makes it easy to work with the moonshine groups and use it to describe John Duncan’s solution of the $E(8)$-observation.

I’ll try to improve the internal referencing over the coming weeks/months, include an index and add extra material as we will be studying moonshine for the Mathieu groups as well as a construction of the Monster-group in next semester’s master-seminar. All comments, corrections and suggestions for extra posts are welcome!

If you are interested you can also download two other booklets : The Bourbaki Code (38 pages) containing all Bourbaki-related posts and absolute geometry (63 pages) containing the posts related to the “field with one element” and its connections to (noncommutative) geometry and number theory. 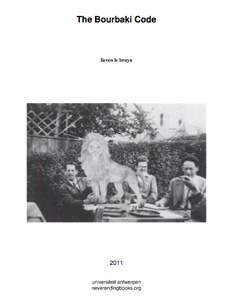 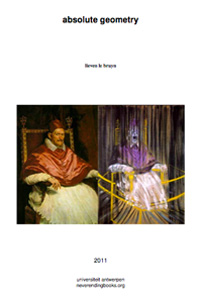 I’ll try to add to the ‘absolute geometry’-booklet the posts from last semester’s master-seminar (which were originally posted at angs@t/angs+) and write some new posts covering the material that so far only exists as prep-notes. The links above will always link to the latest versions of these booklets.