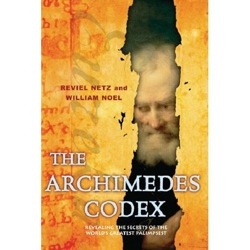 Vacation is always a good time to catch up on some reading. Besides, there’s very little else you can do at night in a ski-resort… This year, I’ve taken along The Archimedes Codex: Revealing The Secrets Of The World’s Greatest Palimpsest by Reviel Netz and William Noel telling the story of the Archimedes Palimpsest.

The most remarkable of the above works is The Method, of which the palimpsest contains the only known copy. In his other works, Archimedes often proves the equality of two areas or volumes with his method of double contradiction: assuming that the first is bigger than the second leads to a contradiction, as does the assumption that the first be smaller than the second; so the two must be equal. These proofs, still considered to be rigorous and correct, used what we might now consider secondary-school geometry with rare brilliance. Later writers often criticized Archimedes for not explaining how he arrived at his results in the first place. This explanation is contained in The Method.
Essentially, the method consists in dividing the two areas or volumes in infinitely many stripes of infinitesimal width, and “weighing” the stripes of the first figure against those of the second, evaluated in terms of a finite Egyptian fraction series. He considered this method as a useful heuristic but always made sure to prove the results found in this manner using the rigorous arithmetic methods mentioned above.
He was able to solve problems that would now be treated by integral calculus, which was formally invented in the 17th century by Isaac Newton and Gottfried Leibniz, working independently. Among those problems were that of calculating the center of gravity of a solid hemisphere, the center of gravity of a frustum of a circular paraboloid, and the area of a region bounded by a parabola and one of its secant lines. Contrary to exaggerations found in some 20th century calculus textbooks, he did not use anything like Riemann sums, either in the work embodied in this palimpsest or in any of his other works. (For explicit details of the method used, see Archimedes’ use of infinitesimals.)
A problem solved exclusively in the Method is the calculation of the volume of a cylindrical wedge, a result that reappears as theorem XVII (schema XIX) of Kepler’s Stereometria.
Some pages of the Method remained unused by the author of the Palimpsest and thus they are still lost. Between them, an announced result concerned the volume of the intersection of two cylinders, a figure that Apostol and Mnatsakian have renamed n = 4 Archimedean globe (and the half of it, n = 4 Archimedean dome), whose volume relates to the n-polygonal pyramid.
In Heiberg’s time, much attention was paid to Archimedes’ brilliant use of infinitesimals to solve problems about areas, volumes, and centers of gravity. Less attention was given to the Stomachion, a problem treated in the Palimpsest that appears to deal with a children’s puzzle. Reviel Netz of Stanford University has argued that Archimedes discussed the number of ways to solve the puzzle. Modern combinatorics leads to the result that this number is 17,152. Due to the fragmentary state of the palimpsest it is unknown whether or not Archimedes came to the same result. This may have been the most sophisticated work in the field of combinatorics in Greek antiquity.

Also I hope to finish the novel Interred with their bones by Jennifer Lee Carrell (though I prefer the Dutch title, “Het Shakespeare Geheim” that is, “The Shakespeare Secret”) on a lost play by Shakespeare, and have a re-read of The music of the primes as I’ll use this book for my course starting next week.