(via the Arcadian Functor) At the time of the doing the Perelman-post someone rightfully commented that “making a voluntary retreat from the math circuit to preserve one’s own well-being (either mental, physical, scientific …)” should rather be called doing the Grothendieck as he was the first to pull this stunt. 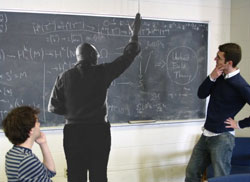 On Facebook a couple of people have created the group The Petition for Alexander Grothendieck to Return from Exile. As you need to sign-up to Facebook to use this link and some of you may not be willing to do so, let me copy the description.

Alexander Grothendieck was born in Berlin, Germany on March 28, 1928. He was one of the most important and enigmatic mathematicians of the 20th century. After a lengthy and very productive career, highlighted by the awarding of the Fields Medal and the Crafoord Prize (the latter of which he declined), Grothendieck disappeared into the French countryside and ceased all mathematical activity. Grothendieck has lived in self-imposed exile since 1991.

We recently spotted Grothendieck in the “Gentleman’s Choice” bar in Montreal, Quebec. He was actually a really cool guy, and we spoke with him for quite some time. After a couple of rounds (on us) we were able to convince him to return from exile, under one stipulation – we created a facebook petition with 1729 mathematician members!

If 1729 mathematicians join this group, then Alexander Grothendieck will return from exile!!

1729 being of course the taxicab-curve number. The group posts convincing photographic evidence (see above) for their claim, has already 201 members (the last one being me) and has this breaking news-flash

Last week Grothendieck, or “the ‘Dieck” as we affectionately refer to him, returned to Montreal for a short visit to explain some of the theories he has been working on over the past decade. In particular, he explained how he has generalised the theory of schemes even further, to the extent that the Riemann Hypothesis and a Unified Field Theory are both trivial consequences of his work.

You know what to do!