the future of this blog (2)

is decided : I’ll keep maintaining this URL until new-year’s eve. At that time I’ll be blogging here for 5 years…

The few encounters I’ve had with architects, taught me this basic lesson of life : the main function of several rooms in a house changes every 5 years (due to children and yourself getting older).

So, from january 1st 2009, I’ll be moving out of here. I will leave the neverendingbooks-site intact for some time to come, so there is no need for you to start archiving it en masse, yet.

Previously I promised to reconsider this blog’s future over a short vacation, but as vacation is looking to be as illusory as the 24-dimensional monster-manifold, I spend my time throwing up ideas into thin and, it seems, extremely virtual air.

Some of you will think this is a gimmick, aiming to attract more comments (there is no post getting more responses than an imminent-end-to-this-blog-post) but then I hope to have settled this already. Neverendingbooks will die on 31st of december 2008. The only remaining issue being : do I keep on blogging or do I look for another time-consumer such as growing tomatoes or, more probably, collecting single malts…

For reasons I’ve stated before, I can see little future in anything but a conceptual-, group- blog. The first part I can deal with, but for the second I’ll be relying on others. So, all I can do is offer formats hoping that some of you are willing to take the jump and try it out together.

Such as in the bloomsday-post where I sketched the BistroMath blog-concept. Perhaps you thought I was just kidding, hoping for people to commit themselves and them calling “Gotcha…”. Believe me, 30 years of doing mathematics have hardwired my brains such that I always genuinely believe in the things I write down at the moment I do (but equally, if someone offers me enough evidence to the contrary, I’ll drop any idea on the spot).

I still think the BistroMath-project has the potential of leading to a bestseller but Ive stated I was not going to pursue the idea if not at least 5 people were willing to join and at least 1 publisher showed an interest. Ironically, I got 2 publishers interested but NO contributors… End of that idea.

Today I offer another conceptual group-blog : the Noether-boys seminar (with tagline ; _the noncommutative experts’ view on 21st century mathematics_). And to make it a bit more concrete Ive even designed a potential home-page : 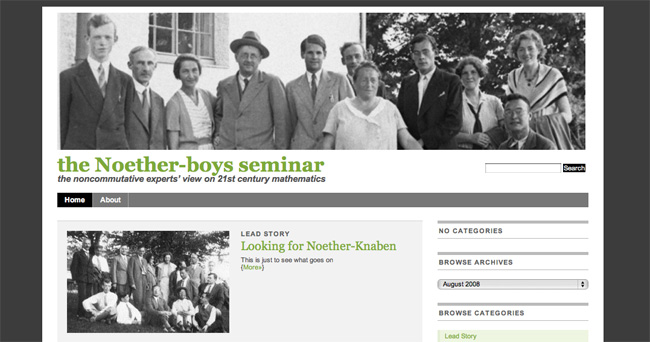 So, what’s the deal? In the 1930-ties Emmy Noether collected around her in Goettingen an exceptionally strong group of students and collaborators (among them : Deuring, Fitting, Levitski, Schilling, Tsen, Weber, Witt, VanderWaerden, Brauer, Artin, Hasse, MacLane, Bernays, Tausky, Alexandrov… to name a few).

Collectively, they were know as the “Noether-boys” (or “Noether-Knaben” or “Trabanten” in German) and combined seminar with a hike to the nearby hills or late-night-overs at Emmy’s apartment. (Btw. there’s nothing sexist about Noether-boys. When she had to leave Germany for Bryn Mawr College, she replaced her boys to form a group of Noether-girls, and even in Goettingen there were several women in the crowd).

They were the first generation of mathematicians going noncommutative and had to struggle a bit to get their ideas accepted.
I’d like to know what they might think about the current state of mathematics in which noncommutativity seems to be generally accepted, even demanded if you want to act fashionable.

I’m certain half of the time they would curse intensely, and utter something like ‘steht shon alles bei Frau Noether…’ (as Witt is witnessed to have done at least once), and about half the time they might get genuinely interested, and be willing to try and explain the events leading up to this to their fellow “Trabanten”. Either way, it would provide excellent blog-posts.

So I’m looking for people willing to borrow the identity of one of the Noether-boys or -girls. That is, you have to be somewhat related to their research and history to offer a plausible reaction to recent results in either noncommutative algebra, noncommutative geometry or physics. Assuming their identity you will then blog to express your (that is, ‘their’) opinion and interact with your fellow Trabanten as might have been the case in the old days…

I’d like to keep Emmy Noether for the admin-role of the blog but all other characters are free at this moment (except I’m hoping that no-one will choose my favourite role, which is probably the least expected of them anyway).

So please, if you think this concept might lead to interesting blogging, contact me! If I don’t get any positives in this case either, I might think about yet another concept (or instead may give up entirely).