Fortunately,
there is a drastic shortcut to the general tree-argument of last time, due to
Roger Alperin. Recall that the Moebius
transformations corresponding to u resp. v send z resp. to

There are two subcases, either $w=v^{-1}uv^{\pm}u \dots
v^{\pm}u $ in which case $w(\mathcal{P}) \subset v^{-1}(\mathcal{N}) $
and this latter set is contained in the set of all positive irrational
real numbers which are strictly larger than one .

Or, $w=vuv^{\pm}u \dots v^{\pm}u $ in which case
$w(\mathcal{P}) \subset v(\mathcal{N}) $ and this set is contained in
the set of all positive irrational real numbers strictly smaller than
one .

More
generally, if G and H are finite groups, then the free product $G
\ast H $ consists of all words of the form $~(g_1)h_1g_2h_2g_3
\dots g_nh_n(g_{n-1}) $ (so alternating between non-identity
elements of G and H) and the group-law is induced by concatenation
of words (and group-laws in either G or H when end terms are
elements in the same group).

Now let us turn to congruence subgroups of
the modular group.
With $\Gamma(n) $ one denotes the kernel of the natural
surjection

that is all elements represented by a matrix

that is the
free product of k copies of $C_2 $, l copies of $C_3 $ and m copies
of $C_{\infty} $ where it should be noted that k,l and m are allowed
to be zero. There is an elegant way to calculate explicit generators of
these factors for congruence subgroups, due to Ravi S. Kulkarni (An
Arithmetic-Geometric Method in the Study of the Subgroups of the Modular
Group , American Journal of Mathematics, Vol. 113, No. 6. (Dec.,
1991), pp. 1053-1133) which deserves another (non-course) post.

and that
generators for $\Gamma(2) $ are given by the
matrices

Next,
one has to write these generators in terms of the generating matrices
u and v of $PSL_2(\mathbb{Z}) $ and as we know all relations between
u and v the relations of these congruence subgroups will follow.

In fact,
the group $\Gamma_0(2) $ is staring you in the face whenever you come to
this site. I fear I’ve never added proper acknowledgements for the
beautiful header-picture 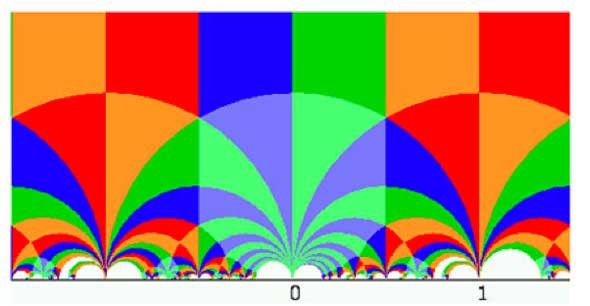 so I’d better do it now. The picture is due to Helena
Verrill and she has a
page with
more pictures. The header-picture depicts a way to get a fundamental
domain for the action of $\Gamma_0(2) $ on the upper half plane. Such a
fundamental domain consists of any choice of 6 tiles with different
colours (note that there are two shades of blue and green). Helena also
has a
Java-applet
to draw fundamental domains of more congruence subgroups.