The artist and the mathematician 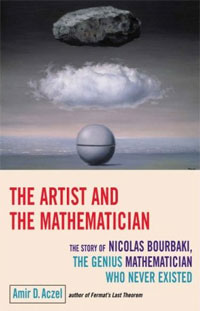 Over the week-end I read The artist and the mathematician (subtitle : The story of Nicolas Bourbaki, the genius mathematician who never existed) by Amir D. Aczel.

Whereas the central character of the book should be Bourbaki, it focusses more on two of Bourbaki’s most colorful members, André Weil and Alexander Grothendieck, and the many stories and myths surrounding them.

The opening chapter (‘The Disappearance’) describes the Grothendieck’s early years (based on the excellent paper by Allyn Jackson Comme Appelé du Néant ) and his disappearance in the Pyrenees in the final years of last century. The next chapter (‘An Arrest in Finland’) recount the pre-WW2 years of Weil and the myth of his arrest in Finland and his near escape from execution (based on Weil’s memoires The Apprenticeship of a Mathematician). Chapter seven (‘The Café’) describes the first 10 proto-Bourbaki meetings following closely the study ‘A Parisian Café and Ten Proto-Bourbaki Meetings (1934-1935)‘ by Liliane Beaulieu. Etc. etc.

All the good ‘Bourbaki’-stories get a place in this book, not always historically correct. For example, on page 90 it is suggested that all of the following jokes were pulled at the Besse-conference, July 1935 : the baptizing of Nicolas, the writing of the Comptes-Rendus paper, the invention of the Bourbaki-daughter Betti and the printing of the wedding invitation card. In reality, all of these date from much later, the first two from the autumn of 1935, the final two no sooner than april 1939…

One thing I like about this book is the connection it makes with other disciplines, showing the influence of Bourbaki’s insistence on ‘structuralism’ in fields as different as philosophy, linguistics, anthropology and literary criticism. One example being Weil’s group-theoretic solution to the marriage-rules problem in tribes of Australian aborigines studied by Claude Lévi-Strauss, another the literary group Oulipo copying Bourbaki’s work-method.

Another interesting part is Aczel’s analysis of Bourbaki’s end. In the late 50ties, Grothendieck tried to convince his fellow Bourbakis to redo their work on the foundations of mathematics, changing these from set theory to category theory. He failed as others felt that the foundations had already been laid and there was no going back. Grothendieck left, and Bourbaki would gradually decline following its refusal to accept new methods. In Grothendieck’s own words (in “Promenade” 63, n. 78, as translated by Aczel) :

“Additionally, since the 1950s, the idea of structure has become passé, superseded by the influx of new ‘categorical’ methods in certain of the most dynamical areas of mathematics, such as topology or algebraic geometry. (Thus, the notion of ‘topos’ refuses to enter into the ‘Bourbaki sack’ os structures, decidedly already too full!) In making this decision, in full cognizance, not to engage in this revision, Bourbaki has itself renounced its initial ambition, which has been to furnish both the foundations and the basic language for all of modern mathematics.”

Finally, it is interesting to watch Aczel’s own transformation throughout the book, from slavishly copying the existing Weil-myths and pranks at the beginning of the book, to the following harsh criticism on Weil, towards the end (p. 209) :

“From other information in his autobiography, one gets the distinct impression that Weil was infatuated with the childish pranks of ‘inventing’ a person who never existed, creating for him false papers and a false identity, complete with a daughter, Betti, who even gets married, parents and relatives, and membership in a nonexistent Academy of Sciences of the nonexistent nation of Polvedia (sic).
Weil was so taken with these activities that he even listed, as his only honor by the time of his death ‘Member, Poldevian Academy of Sciences’. It seems that Weil could simply not go beyond these games: he could not grasp the deep significance and power of the organization he helped found. He was too close, and thus unable to see the great achievements Bourbaki was producing and to acknowledge and promote these achievements. Bourbaki changed the way we do mathematics, but Weil really saw only the pranks and the creation of a nonexistent person.”

Judging from my own reluctance to continue with the series on the Bourbaki code, an overdose reading about Weil’s life appears to have this effect on people…