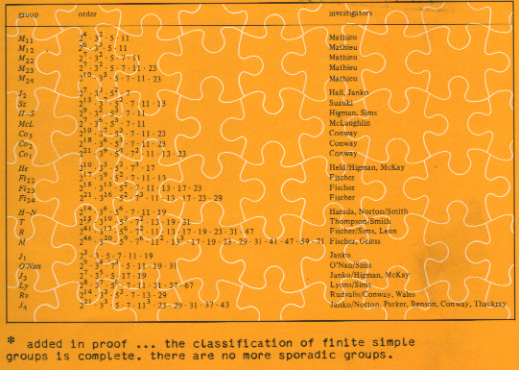 (click on the left picture to see a larger scanned image). In it is a
beautiful paper by John Conway “Monsters and moonshine” on the
classification project. Along the way he describes the simplest
non-trivial simple group $A_5 $ as the icosahedral group. as well as
other interpretations as Lie groups over finite fields. He also gives a
nice introduction to representation theory and the properties of the
character table allowing to reconstruct $A_5 $ only knowing that there
must be a simple group of order 60.
A more technical account
of the classification project (sketching the main steps in precise
formulations) can be found online in the paper by Ron Solomon On finite simple
groups and their classification. In addition to the posts by John Baez mentioned
in this
post he has a few more columns on Platonic solids and their relation to Lie
algebras, continued here.