Oulipo’s use of the Tohoku paper

Many identify the ‘Tohoku Mathematical Journal’ with just one paper published in it, affectionately called the Tohoku paper: “Sur quelques points d’algèbre homologique” by Alexander Grothendieck.

In this paper, Grothendieck reshaped homological algebra for Abelian categories, extending the setting of Cartan-Eilenberg (their book and the paper both appeared in 1957). While working on the Tohoku paper in Kansas, Grothendieck did not have access to the manuscript of the 1956 book of Cartan-Eilenberg, about which he heard from his correspondence with Serre.

“There is a striking resemblance between the title of the Grothendieck’s article “Sur quelques points d’algèbre homologique”, and that of Fréchet‘s thesis “Sur quelques points d’analyse fonctionelle”. Why? Grothendieck remains silent about it. Perhaps he saw a methodological similarity between the introduction, by Fréchet, of abstract spaces in order to develop the foundations of functional calculus and that of the Abelian categories he needed to clarify the homological theory. Compared with categories of sets, groups, topological spaces, etc. that were used until then, Abelian categories are in effect abstract categories.”

But, what does this have to do with the literary group OuLiPo (ouvroir de littérature potentielle, ‘workshop of potential literature’)?

Several members of Oulipo were either active mathematicians or at least had an interest in mathematics. Sometimes, Oulipo is said to be the literary answer to Bourbaki. The group explored new ways to create literature, often with methods coming from mathematics or programming.

One such method is described in “Chimères” by Le Lionnais:

One takes a source text A. One ’empties’ it, that is, one deletes all nouns, adjectives and verbs, but marks where they were in the text. In this way we have ‘prepared’ the text.

In the example Le Lionnais gives, the liste M is the list of all verbs appearing in the Tohoku paper. 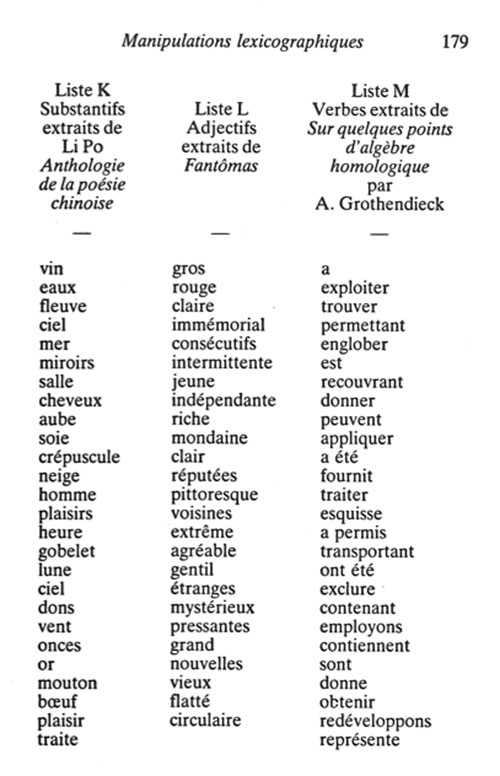