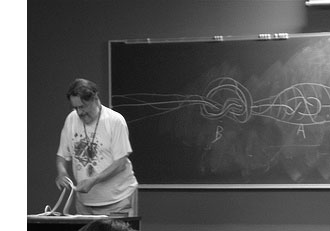 Last time we did recall Cantor’s addition and multiplication on ordinal numbers. Note that we can identify an ordinal number $\alpha $ with (the order type of) the set of all strictly smaller ordinals, that is, $\alpha = { \alpha’~:~\alpha’ < \alpha } $. Given two ordinals $\alpha $ and $\beta $ we will denote their Cantor-sums and products as $[ \alpha + \beta] $ and $[\alpha . \beta] $.

The reason for these square brackets is that John Conway constructed a well behaved nim-addition and nim-multiplication on all ordinals $\mathbf{On}_2 $ by imposing the ‘simplest’ rules which make $\mathbf{On}_2 $ into a field. By this we mean that, in order to define the addition $\alpha + \beta $ we must have constructed before all sums $\alpha’ + \beta $ and $\alpha + \beta’ $ with $\alpha’ < \alpha $ and $\beta’ < \beta $. If + is going to be a well-defined addition on $\mathbf{On}_2 $ clearly $\alpha + \beta $ cannot be equal to one of these previously constructed sums and the ‘simplicity rule’ asserts that we should take $\alpha+\beta $ the least ordinal different from all these sums $\alpha’+\beta $ and $\alpha+\beta’ $. In symbols, we define

where $\mathbf{mex} $ stands for ‘minimal excluded value’. If you’d ever played the game of Nim you will recognize this as the Nim-addition, at least when $\alpha $ and $\beta $ are finite ordinals (that is, natural numbers) (to nim-add two numbers n and m write them out in binary digits and add without carrying). Alternatively, the nim-sum n+m can be found applying the following two rules : 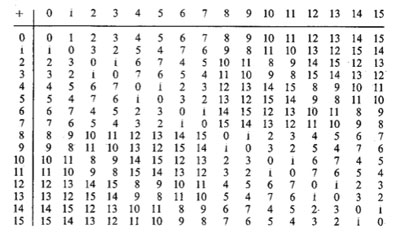 In fact, the above two rules allow us to compute the nim-sum of any two ordinals. Recall from last time that every ordinal can be written uniquely as as a finite sum of (ordinal) 2-powers :
$\alpha = [2^{\alpha_0} + 2^{\alpha_1} + \ldots + 2^{\alpha_k}] $, so to determine the nim-sum $\alpha+\beta $ we write both ordinals as sums of ordinal 2-powers, delete powers appearing twice and take the Cantor ordinal sum of the remaining sum. 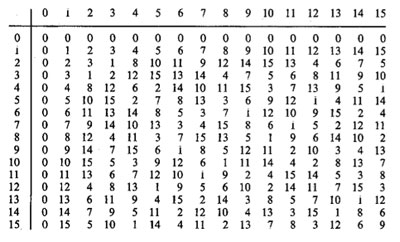 Nim-multiplication of ordinals is a bit more complicated. Here’s the definition as a minimal excluded value

for all $\alpha’ < \alpha, \beta’ < \beta $. The rationale behind this being that both $\alpha-\alpha’ $ and $\beta – \beta’ $ are non-zero elements, so if $\mathbf{On}_2 $ is going to be a field under nim-multiplication, their product should be non-zero (and hence strictly greater than 0), that is, $~(\alpha-\alpha’).(\beta-\beta’) > 0 $. Rewriting this we get $\alpha.\beta > \alpha’.\beta+\alpha.\beta’-\alpha’.\beta’ $ and again the ‘simplicity rule’ asserts that $\alpha.\beta $ should be the least ordinal satisfying all these inequalities, leading to the $\mathbf{mex} $-definition above. The table gives the beginning of the nim-multiplication table for ordinals. For finite ordinals n and m there is a simple 2 line procedure to compute their nim-product, similar to the addition-rules mentioned before :

Using these rules, associativity and distributivity and our addition rules it is now easy to work out the nim-multiplication $n.m $ : write out n and m as sums of (multiplications by 2-powers) of Fermat 2-powers and apply the rules. Here’s an example

Clearly, we’d love to have a similar procedure to calculate the nim-product $\alpha.\beta $ of arbitrary ordinals, or at least those smaller than $\omega^{\omega^{\omega}} $ (recall that Conway proved that this ordinal is isomorphic to the algebraic closure $\overline{\mathbb{F}}_2 $ of the field of two elements). From now on we restrict to such ‘small’ ordinals and we introduce the following special elements :

where $q $ runs over all prime powers. The crucial fact now is that for this decreasing product we have a rule similar to addition of 2-powers, that is Conway-products coincide with the Cantor-products

But then, using associativity and commutativity of the Conway-product we can ‘nearly’ describe all products $[\omega^{\alpha}.2^{n_0}].[\omega^{\beta}.2^{m_0}] $. The remaining problem being that it may happen that for some q we will end up with an exponent $m(q)+m(q’)>p $. But this can be solved if we know how to take p-powers. The rules for this are as follows

For an enjoyable video on all of this, see Conway’s MSRI lecture on Infinite Games. The nim-arithmetic part is towards the end of the lecture but watching the whole video is a genuine treat!