According to a science article in the New York Times, archeologists have discovered “signs of advanced math” in medieval mosaics. An example of a quasi-crystalline Penrose pattern was found at the Darb-i Imam shrine in Isfahan, Iran. 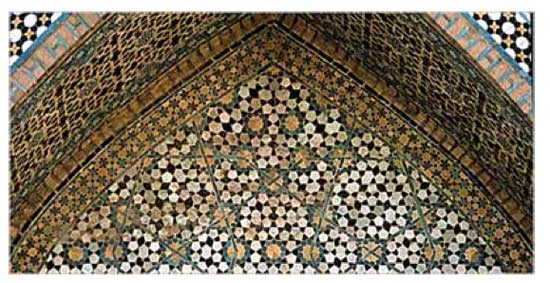 “A new study shows that the Islamic pattern-making process, far more intricate than the laying of one‚Äôs bathroom floor, appears to have involved an advanced math of quasi crystals, which was not understood by modern scientists until three decades ago. Two years ago, Peter J. Lu, a doctoral student in physics at Harvard University, was transfixed by the geometric pattern on a wall in Uzbekistan. It reminded him of what mathematicians call quasi-crystalline designs. These were demonstrated in the early 1970s by Roger Penrose, a mathematician and cosmologist at the University of Oxford. Mr. Lu set about examining pictures of other tile mosaics from Afghanistan, Iran, Iraq and Turkey, working with Paul J. Steinhardt, a Princeton cosmologist who is an authority on quasi crystals and had been Mr. Lu’s undergraduate adviser. ”

Penrose tilings are one of the motivating examples of Alain Connes’ book as there is a $C^* $-algebra associated to it. In fact, the algebra is AF ( a limit of semi-simple finite dimensional algebras) so is even a formally smooth algebra in Kontsevichian noncommutative geometry (it is remarkable how quickly one gets used to silly terminology…). However, the Penrose algebra is simple, so rather useless from the point of view of finite dimensional representations… Still, Connesian noncommutative geometry may be a recent incarnation of the medieval Tehran program (pun intended). Thanks to easwaran for the link (via Technorati).

Added, March 1 : I haven’t looked at the Connes-Marcolli paper A walk in the noncommutative garden for a while but now that I do, I see that they mentioned the above already at the end of their section on Tilings (page 32). They also include clearer pictures. 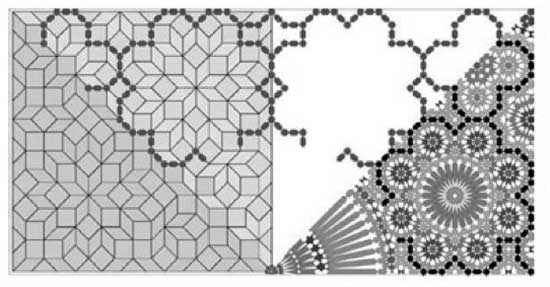