music of the primes 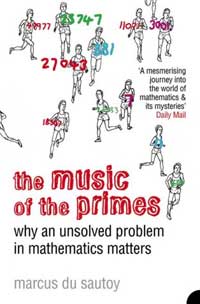 Let me
admit it : i was probably wrong in this post to
advise against downloading A walk in the noncommutative
garden by Alain Connes and Matilde Marcolli. After all, it seems
that Alain&Matilde are on the verge of proving the biggest open
problem in mathematics, the Riemann
hypothesis using noncommutative geometry. At least, this is the
impression one gets from reading through The music of the
primes, why an unsolved problem in mathematics matters by Oxford
mathematician Prof.
Marcus du Sautoy… At the moment I’ve only read the first
chapter (_Who wants to be a millionaire?_) and the final two
chapters (_From orderly zeros to quantum chaos_ and _The
missing piece of the jigsaw_) as I assume I’ll be familiar with most
of the material in between (and also, I’m saving these chapters for some
vacation reading). From what I’ve read, I agree most with the final
review at amazon.co.uk

Fascinating
and infuriating, October 5, 2004
Reviewer: pja_jennings
from Southampton, Hants. United Kingdom
This is a book I found
fascinating and infuriating in turns. It is an excellent layman’s
history of number theory with particular reference to prime numbers and
the Riemann zeta function. As such it is well worth the reading.
However I found that there are certain elements, more of style than
anything else, that annoyed me. Most of the results are handed to us
without any proof whatsoever. All right, some of these proofs would be
obviously well beyond the layman, but one is described as being
understandable by the ancient Greeks (who started the whole thing) so
why not include it as a footnote or appendix?
Having established
fairly early on that the points where a mathematical function
“reaches sea level” are known as zeros, why keep reverting
to the sea level analogy? And although the underlying theme throughout
the book is the apparent inextricable link between the zeta function’s
zeros and counting primes, the Riemann hypothesis, I could find no
clear, concise statement of exactly what Riemann said.
Spanning
over 2000 years, from the ancient Greeks to the 21st century, this is a
book I would thoroughly recommend.

Books on Fermat’s last
theorem (and there are some nice ones, such as Alf Van der Poorten’s
Notes on
Fermat’s last theorem) can take Wiles’ solution as their focal
point. Failing a solution, du Sautoy constructs his book around an
April’s Fool email-message by Bombieri in which he claimed that a young
physicist did prove the Riemann hypothesis after hearing a talk by Alain
Connes. Here’s du Sautoy’s account (on page 3)

According
to his email, Bombieri has been beaten to his prize. ‘There are
fantastic developments to Alain Connes’s lecture at IAS last wednesday.’
Bombieri began. Several years previously, the mathematical world had
been set alight by the news that Alain Connes had turned his attention
to trying to crack the Riemann Hypothesis. Connes is one of the
revolutionaries of the subject, a benign Robespierre of mathematics to
Bombieri’s Louis XVI. He is an extraordinary charismatic figure whose
fiery style is far from the image of the staid, awkward mathematician.
He has the drive of a fanatic convinced of his world-view, and his
lectures are mesmerising. Amongst his followers he has almost cult
status. They will happily join him on the mathematical barricades to
defend their hero against any counter-offensive mounted from the ancien
regime’s entrenched positions.

Contrary to physics,
mathematics doesn’t produce many books aimed at a larger public. To a
large extend this is caused by most mathematicians’ unwillingness to
sacrifice precision and technical detail. Hence, most of us would never
be able to come up with something like du Sautoy’s description of Weil’s
work on the zeta function of curves over finite fields (page 295)

It was while exploring some of these related landscapes that
Weil discovered a method that would explain why points at sea level in
them like to be in a straight line. The landscapes where Weil was
successful did not have to do with prime numbers, but held the key to
counting how many solutions an equation such as $y^2=x^3-x$ will have if
you are working on one of Gauss’s clock calculators.

But,
it is far too easy to criticize people who do want to make the effort.
Books such as this one will bring more young people to mathematics than
any high-publicity-technical-paper. To me, the chapter on quantum chaos
was an eye-opener as I hadn’t heard too much about all of this before.
Besides, du Sautoy accompanies this book with an interesting website musicofprimes and several of
his articles for newspapers available from his homepage are
a good read (in case you wonder why the book-cover is full of joggers
with a prime number on their T-shirt, you might have a look at Beckham in his
prime number). The music of the
primes will definitely bring many students to noncommutative
geometry and its possible use to proving the Riemann Hypothesis.