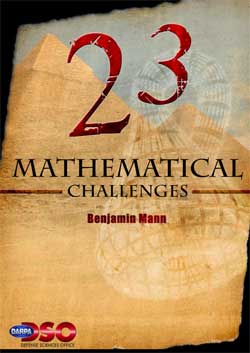 Via the n-category cafe (and just now also the Arcadian functor ) I learned that Benjamin Mann of DARPA has constructed a list of 23 challenges for mathematics for this century.

DARPA is the “Defense Advanced Research Projects Agency” and is an agency of the United States Department of Defense ‘responsible for the development of new technology for use by the military’.

Bejamin Mann is someone in their subdivision DSO, that is, the “Defense Sciences Office” that ‘vigorously pursues the most promising technologies within a broad spectrum of the science and engineering research communities and develops those technologies into important, radically new military capabilities’.

I’m not the greatest fan of the US military, but the proposed list of 23 mathematical challenges is actually quite original and interesting.

What follows is my personal selection of what I consider the top 5 challenges from the list (please disagree) :

1. The Mathematics of Quantum Computing, Algorithms, and Entanglement (DARPA 15) : “In the last century we learned how quantum phenomena shape
our world. In the coming century we need to develop the
mathematics required to control the quantum world.”

3. Geometric Langlands and Quantum Physics (DARPA 17) : “How does the Langlands program, which originated in number
theory and representation theory, explain the fundamental
symmetries of physics? And vice versa?”

4. The Geometry of Genome Space (DARPA 15) : “What notion of distance is needed to incorporate biological utility?”

5. Algorithmic Origami and Biology (DARPA 10) : “Build a stronger mathematical theory for isometric and rigid
embedding that can give insight into protein folding.”

All of this will have to wait a bit, for now