“With irresistible brio and dazzling intelligence, Robin Sloan has crafted a literary adventure story for the 21st century, evoking both the fairy-tale charm of Haruki Murakami and the enthusiastic novel-of-ideas wizardry of Neal Stephenson or a young Umberto Eco, but with a unique and feisty sensibility that’s rare to the world of literary fiction.” (Amazon’s blurb)

I’m a fan of Murakami’s later books (such as 1Q84 or Killing Commendatore), and Stephenson’s earlier ones (such as Snow Crash or Cryptonomicon), so if someone wrote the perfect blend, I’m in. Reading Penumbra’s bookstore, I discovered that these ‘comparisons’ were borrowed from the book itself, leaving out a few other good suggestions:

One cold Tuesday morning, he strolls into the store with a cup of coffee in one hand and his mystery e-reader in the other, and I show him what I’ve added to the shelves:

“Stephenson, Murakami, the latest Gibson, The Information, House of Leaves, fresh editions of Moffat” – I point them out as I go.

This trailer gives a good impression of what the book is about.

As you see, Google features prominently in the book, so it is kind of funny to watch the author, Robin Sloan, give a talk at Google.

Some years later, Sloan wrote a (shorter) prequel Ajax Penumbra 1969, which is also a good read but does not involve fancy technology, unless you count tunnel construction among those. 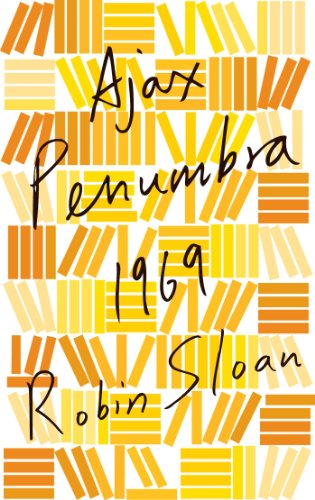 Read it if you want to know how Penumbra ended up in his bookstore and how he recovered the last surviving copy of the book “Techne Tycheon”.

More information (together with reading suggestions) can be found at Mr Penumbra’s 24-hour bookstore: a reading map.