During the 1950ties, the Bourbakistas usually scheduled three meetings in the countryside. In the spring and autumn at places not too far from Paris (Royaumont, Celles-sur-plaines, Marlotte, Amboise…), in the summer they often went to the mountains (Pelvoux, Murols, Sallieres-les-bains,…).

Being a bit autistic, they preferred to return to the same places, rather than to explore new ones: Royaumont (6 times), Pelvoux (5 times), Celles-sur-plaine (4 times), Marlotte (3 times), Amboise (3 times),…

In the past, we’ve tried to pinpoint the exact locations of the pre-WW2 Bourbaki-conferences: in 1935 at le Station Biologique de l’Université Blaise Pascal’, Rue du Lavoir, Besse-et-Saint-Anastaise, in 1936 and 1937 at La Massotterie in Chancay, and in 1938 at l’ecole de Beauvallon (often mistakingly referred to as the ‘Dieulefit-meeting’).

Let’s try to do the same for their conferences in the 1950ties. Making use of the recent La Tribu releases for he period 1953-1960, let’s start arbitrarily with the 1955 fall meeting in Marlotte.

Three conferences were organised in Marlotte during that period:

Grothendieck was present at all three meetings, Weil at the last two. But let us return to the fight between these two (‘congres des minutes de silence’) regarding algebraic geometry/category theory in another post.

Today we’ll just focus on the location of these meetings. At first, this looks an easy enough task as on the opening page of La Tribu we read:

“The conference was held at the Hotel de la mare aux canards’ (‘Hotel of the duck pond’) in Marlotte, near Fontainebleau, from October 23rd till 29th, 1955”.

Just one little problem, I can’t find any reference to a ‘Hotel de la Mare aux Canards’ in Marlotte, neither at present nor in the past.

Nowadays, Bourron-Marlotte is mainly a residential village with no great need for lodgings, apart from a few ‘gites’ and a plush hotel in the local ‘chateau’.

At the end of the 19th century though, there was an influx of painters, attracted by the artistic ‘colonie’ in the village, and they needed a place to sleep, and gradually several ‘Auberges’ and Hotels opened their doors.

Over the years, most of these hotels were demolished, or converted to family houses. The best list of former hotels in Marlotte, and their subsequent fate, I could find is L’essor hôtelier de Bourron et de Marlotte. 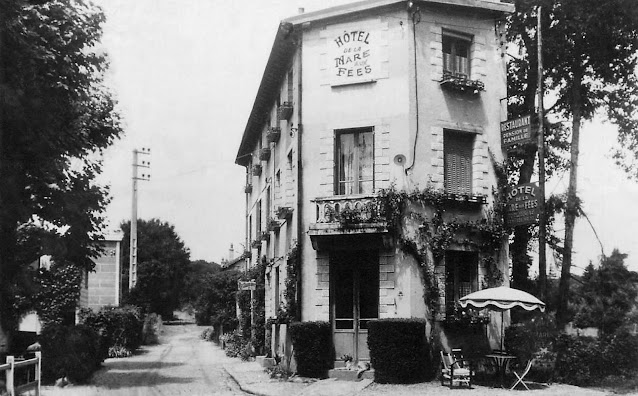 There’s little doubt that this is indeed the location of Bourbaki’s Marlotte-meetings, as the text on page one of La Tribu 37 above continues as (translation by Maurice Mashaal in ‘Bourbaki a secret society of mathematicians’, page 109):

“Modest and subdued sunlight, lustrous bronze leaves fluttering in the wind, a pond without fairies, modules without end, indigestible stones, and pierced barrels: everything contributes to the drowsiness of these blasé believers. ‘Yet they are serious’, says the hotel-keeper, ‘I don’t know what they are doing with all those stones, but they’re working hard. Maybe they’re preparing for a journey to the moon’.”

Bourbaki didn’t see any fairies in the pond, only ducks, so for Him it was the Hotel of the duck pond.

In fact La mare aux fées is one of the best known spots in the forest of Fontainebleau, and has been an inspiration for many painters, including Pierre-August Renoir: 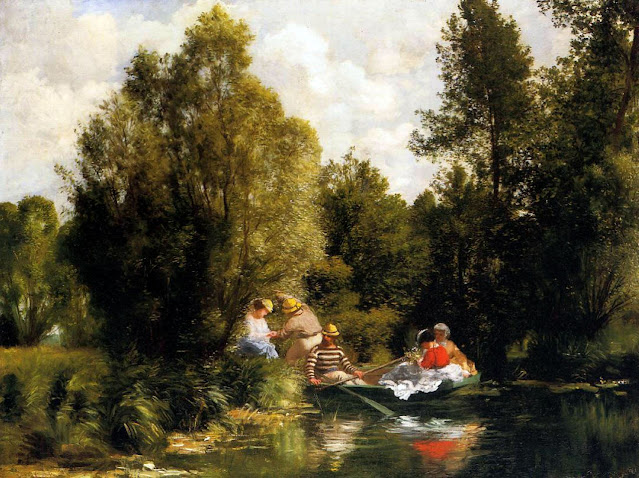 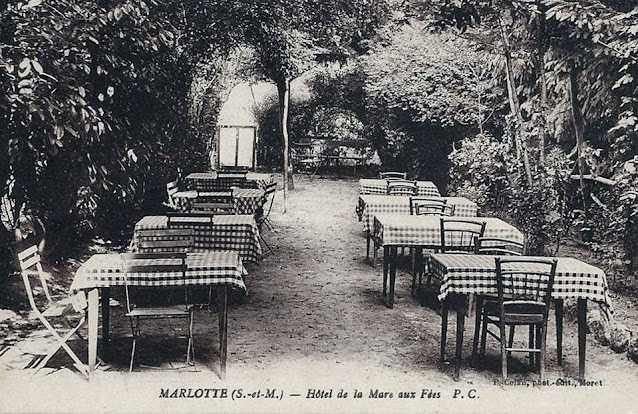 Both photographs are from the beginning of the 20th century, but also in the 50ties it was a Hotel of some renown as celebreties, including the actor Jean Gabin, stayed there.