It was fun following the second game last night in real time. Carlsen got a winning endgame with two bishops against a rook, but blundered with 62. Bg4?? (winning was Kf7), resulting in stalemate.

There was this hilarious message around move 60:

“The computer has just announced that white mates in 31 moves. Of course, the only two people in the building who don’t benefit from that knowledge are behind the pieces.” 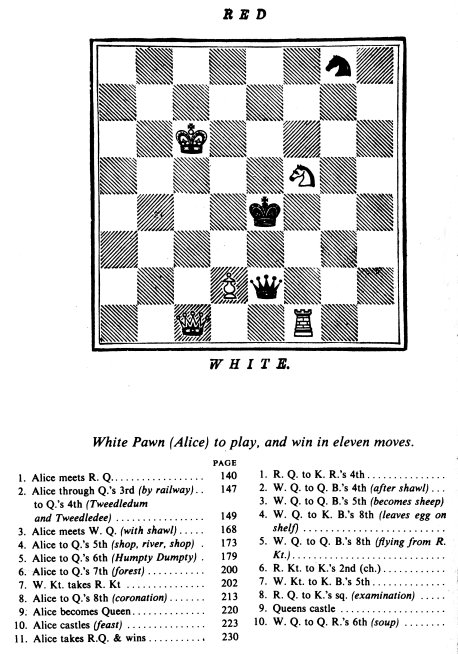 The old notation for files is used:

Further, the row-number depends on whose playing (they both count starting from their own side). Here’s an animated version of the game:

And a very strange game it is.

White makes consecutive moves, which is allowed in some versions of fairy chess.

And, as the late Martin Gardner explains in his book The Annotated Alice:

“The most serious violation of chess rules occurs near the end of the
problem, when the White King is placed in check by the Red Queen without
either side taking account of the fact. “Hardly a move has a sane purpose,
from the point of view of chess,” writes Mr. Madan. It is true that both sides
play an exceedingly careless game, but what else could one expect from the
mad creatures behind the mirror? At two points the White Queen passes up
a chance to checkmate and on another occasion she flees from the Red
Knight when she could have captured him. Both oversights, however, are in
keeping with her absent-mindedness.”

In fact, the whole game reflects the book’s story (Alice is the white pawn travelling to the other side of the board), with book-pages associated to the positions listed on the left. Martin Gardner on this:

“Considering the staggering difficulties involved in dovetailing a chess
game with an amusing nonsense fantasy, Carroll does a remarkable job. At
no time, for example, does Alice exchange words with a piece that is not
then on a square alongside her own. Queens bustle about doing things while
their husbands remain relatively fixed and impotent, just as in actual chess
games. The White Knight’s eccentricities fit admirably the eccentric way in
which Knights move; even the tendency of the Knights to fall off their
horses, on one side or the other, suggests the knight’s move, which is two
squares in one direction followed by one square to the right or left. In order
to assist the reader in integrating the chess moves with the story, each move
will be noted in the text at the precise point where it occurs.”

The starting position is in itself an easy chess-problem: white mates in 3, as explained by Gardner:

” It is amusing to note that it is the Red Queen who persuades Alice to advance along her file to the eighth square. The Queen is protecting herself with this advice, for white has at the outset an easy, though inelegant, checkmate in three moves.
The White Knight first checks at KKt.3. If the Red King moves to either Q6
or Q5, white can mate with the Queen at QB3. The only alternative is for
the Red King to move to K4. The White Queen then checks on QB5,
forcing the Red King to K3. The Queen then mates on Q6. This calls, of
course, for an alertness of mind not possessed by either the Knight or
Queen. ”