The Bourbaki wedding invitation is probably the most effective branding- and marketing-campaign in the history of mathematics.

It contains this, seemingly opaque, paragraph:

The trivial isomorphism will be given to them by P. Adic, of the Diophantine Order, at the Principal Cohomology of the Universal Variety, the 3 Cartember, year VI, at the usual hour.

It was pretty easy to decode the date of the wedding “3 Cartember, year VI” to be June 3rd, 1939, and (a bit more difficult) the wedding place “the Principal Cohomology of the Universal Variety” as the l’église royale Notre-Dame du Val-de-Grâce in Paris.

The identity of the celebrating priest “P. Adic, of the Diophantine Order” remained unclear. The most likely suspect was Helmut Hasse, but I couldn’t place him in Paris on June 3rd, 1939. 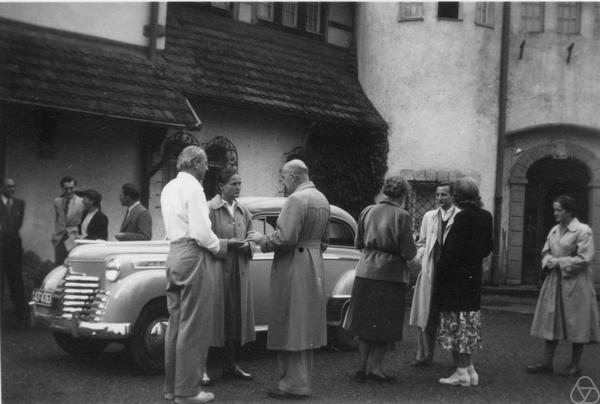 Hasse is the central figure in the picture above, taken in Oberwolfach in 1952, before one of his cars. Here’s another picture of car-freak Hasse (trains were to Andre Weil what cars were to Helmut Hasse). Both pictures are from the MFO photo collection. 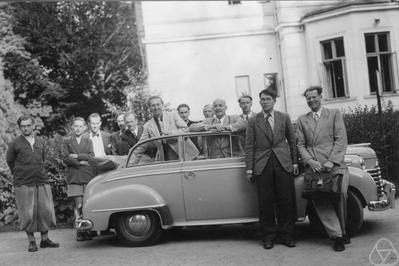 Thanks to Peter Roquette’s publishing of Helmut Hasse’s letters we can now prove that Hasse was not in Paris on that particular day (however, he was there a couple of days earlier) but Weil had every reason to believe he might be there at the time he wrote the wedding invitation.

When was the wedding invitation written?

Frank Smithies recalls the spring 1939 period in Cambridge as follows :

“The climax of the academic year, as far as we were concerned, came in the Easter term. André Weil, Claude Chabauty, and Louis Bouckaert (from Louvain) were all in Cambridge, and the proposal was mooted that a marriage should be arranged between Bourbaki’s daughter Betti and Hector Pétard; the marriage announcement was duly printed in the canonical French style – on it Pétard was described as the ward of Ersatz Stanislas Pondiczery – and it was circulated to the friends of both parties. A couple of weeks later the Weils, Louis Bouckaert, Max Krook (a South African astrophysicist), Ralph and myself made a river excursion to Grantchester by punt and canoe to have tea at the Red Lion; there is a photograph of Ralph and myself, with our triumphantly captured lion between us and André Weil looking benevolently on.”

We know that this picture is taken on May 13th 1939 so the wedding-invitation was drawn up around mid april 1939.

“What did Weil know about Hasse’s visit to Paris?”

Hasse had been invited by Julia to give a series of lectures at the Institut Henri Poincare in 1938, but Hasse postponed his trip to Paris until May 1939.

“It is quite unfortunate that you couldn’t accept your invitation to Paris before this year, because last year all our number-theorists would have been present. By a sad coincidence all of us will be on travel this coming May (except for Chevalley perhaps who might have returned from the US by then). Pisot will be in Gottingen, Chabauty in Manchester visiting Mordell and I will be in Cambridge as I obtained a travel grant for England and Scandinavia.”

Clearly, Weil was aware of the upcoming visit of Hasse to Paris at the end of May, and there was no reason for him to assume that he wouldn’t be able to stay a weekend longer.

What do we know of Hasse’s visit to Paris?

Because Julia was exhausted and was on a three months sick leave, Elie Cartan took over the job of organising Hasse’s lecture series. In a letter of April 25th 1939 he proposes some possible dates, to which Hasse replies on April 30th 1939: 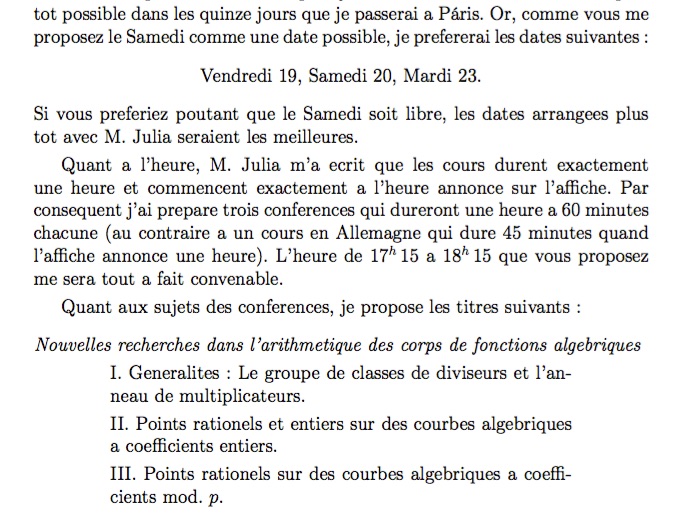 In it he fixes for the first time the dates of his talks which will be on “New results in the arithmetic of algebraic function fields” and consist of three lectures:

– On Friday 19th 1939: “Generalities: the group of divisor classes and the multiplier ring”

– On Saturday 20th 1939: “Rational and integral points on algebraic curves over the integers”

He also mentions that he would stay for 15 days in Paris, arriving on May 17th, in time for the Jubilee Conference for Elie Cartan, scheduled on May 18th.

Weil must have known that Hasse would be present at the Cartan-fest and give a series of lectures in the following weeks. He had every reason to believe that Hasse would still be in Paris on Saturday June 3rd.

Back at home, as on that very day he wrote a letter to Henri Cartan, thanking him for an enjoyable day’s stay in Strasbourg, on the way back from Paris, on June 1st 1939: 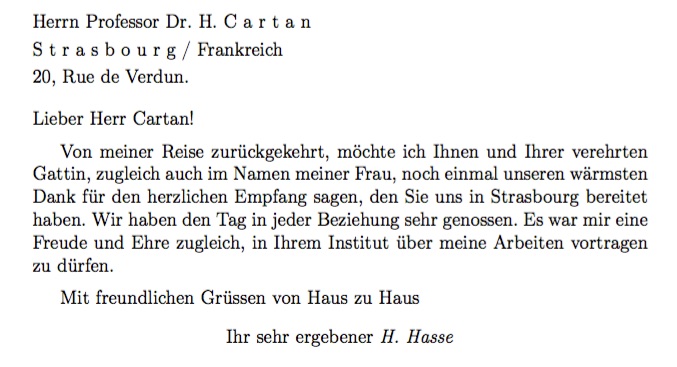 If you want to catch up with previous posts on the Bourbaki wedding, you might want to download the booklet The Bourbaki Code.