Andre Weil wrote about his arrest as a Russian spy in november 1939 :

“The manuscripts they found appeared
suspicious – like those of Sophus Lie, arrested on charges of spying
in Paris, in 1870. They also found several rolls of stenotypewritten
paper at the bottom of a closet. When I said these were the text of a
Balzac novel, the explanation must have seemed far-fetched. There was
also a letter in Russian, from Pontrjagin, I believe, in response to
a letter I had written at the beginning of the summer regarding a
possible visit to Leningrad; and a packet of calling cards belonging
to Nicolas Bourbaki, member of the Royal Academy of Poldavia, and even
some copies of his daughter Betti Bourbaki’s wedding invitation, which
I had composed and had printed in Cambridge several months earlier in
collaboration with Chabauty and my wife.”

I’ve always wondered how on earth the Finnish police could interpret mathematical texts as coded messages. Reading the ‘faire-part’ (attempted translation below) it is hard to view it as anything but a coded message…

Here it is : a copy of the ‘faire-part’ of Betti Bourbaki’s wedding to Hector Petard, that nearly did cost Andre Weil’s life. 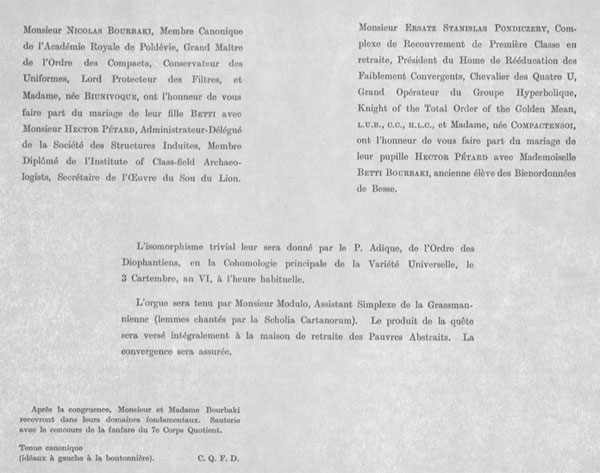 Monsieur Nicolas Bourbaki, Canonical Member of the Royal Academy of Poldavia, Grand Master of the Order of Compacts, Conserver of Uniforms, Lord Protector of Filters, and Madame nee One-to-One, have the honor of announcing the mariage of their daughter Betti with Monsieur Hector Petard, Delegate Administrator of the Society of Induced Structures, Member of the Institute of Classified Archeologists, Secretary of the Work of the Lion Hunt.

Monsieur Ersatz Stanislas Pondiczery, retired First Class Covering Complex, President of the Reeducation Home for Weak Convergents, Chevalier of the Four U’s, Grand Operator of the Hyperbolic Group, Knight of the Total Order of the Golden Mean, L.U.B., C.C., H.L.C., and Madame nee Compact-in-itself, have the honor of announcing the marriage of their ward Hector Petard with Mademoiselle Betti Bourbaki, a former student of the Well-Ordereds of Besse.

The trivial isomorphism will be given to them by P. Adic, of the Diophantine Order, at the Principal Cohomology of the Universal Variety, the 3 Cartember, year VI, at the usual hour.

The organ will be played by Monsieur Modulo, Assistant Simplex of the Grassmannian (Lemmas will be sung by Scholia Cartanorum). The result of the collection will be given to the House of Retirement foor Poor Abstracts, Convergence is assured.

After the congruence, Monsieur and Madame Bourbaki will receive guests in their Fundamental Domain; there will be dancing with music by the Fanfare of the VIIth Quotient Field.