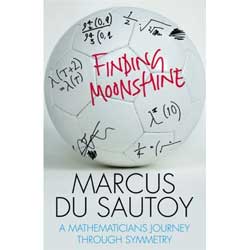 On friday, I did spot in my regular Antwerp-bookshop Finding Moonshine by Marcus du Sautoy and must have uttered a tiny curse because, at once, everyone near me was staring at me…

To make matters worse, I took the book from the shelf, quickly glanced through it and began shaking my head more and more, the more I convinced myself that it was a mere resampling of Symmetry and the Monster, The equation that couldn’t be solved, From Error-Correcting Codes through Sphere Packings to Simple Groups and the diary-columns du Sautoy wrote for a couple of UK-newspapers about his ‘life-as-a-mathematician’…

Still, I took the book home, made a pot of coffee and started reading the first chapter. And, sure enough, soon I had to read phrases like “The first team consisted of a ramshackle collection of mathematical mavericks. One of the most colourful was John Horton Conway, currently professor at the University of Princeton. His mathematical and personal charisma have given him almost cult status…” and “Conway, the Long John Silver of mathematics, decided that an account should be published of the lands that they had discovered on their voyage…” and so on, and so on, and so on.

The main problem I have with du Sautoy’s books is that their main topic is NOT mathematics, but rather the lives of mathematicians (colourlful described with childlike devotion) and the prestige of mathematical institutes (giving the impression that it is impossible to do mathematics of quality if one isn’t living in Princeton, Paris, Cambridge, Bonn or … Oxford). Less than a month ago, I reread his ‘Music of the Primes’ so all these phrases were still fresh in my memory, only on that occasion Alain Connes is playing Conway’s present role…

I was about to throw the book away, but first I wanted to read what other people thought about it. So, I found Timothy Gowers’ review, dated febraury 21st, in the Times Higher Education. The first paragraph below hints politely at the problems I had with Music of the Primes, but then, his conclusion was a surprise

The attitude of many professional mathematicians to the earlier book was ambivalent. Although they were pleased that du Sautoy was promoting mathematics, they were not always convinced by the way that he did it.

I myself expected to have a similar attitude to Finding Moonshine, but du Sautoy surprised me: he has pulled off that rare feat of writing in a way that can entertain and inform two different audiences – expert and non-expert – at the same time.

Okay, so maybe I should give ‘Finding Moonshine’ a further chance. After all, it is week-end and, I have nothing else to do than attending two family-parties… so I read the entire book in a couple of hours (not that difficult to do if you skip all paragraphs that have the look and feel of being copied from the books mentioned above) and, I admit, towards the end I mellowed a bit. Reading his diary notes I even felt empathy at times (if this is possible as du Sautoy makes a point of telling the world that most of us mathematicians are Aspergers). One example :

One of my graduate students has just left my office. He’s done some great work over the past three years and is starting to write up his doctorate, but he’s just confessed that he’s not sure that he wants to be a mathematician. I’m feeling quite sobered by this news. My graduate students are like my children. They are the future of the subject. Who’s going to read all the details of my papers if not my mathematical offspring? The subject feels so tribal that anyone who says they want out is almost a threat to everything the tribe stands for.
Anton has been working on a project very close to my current problem. There’s no denying that one can feel quite disillusioned by not finding a way into a problem. Last year one of my post-docs left for the City after attempting to scale this mountain with me. I’d already rescued him from being dragged off to the City once before. But after battling with our problem and seeing it become more and more complex, he felt that he wasn’t really cut out for it.

What is unsettling for me is that they both questioned the importance of what we are doing. They’ve asked that ‘What’s it all for?’ question, and think they’ve seen the Emperor without any clothes.
Anton has questioned whether the problems we are working on are really important. I’ve explained why I think these are fundamental questions about basic objects in nature, but I can see that he isn’t convinced. I feel I am having to defend my whole existence. I’ve arranged for him to join me at a conference in Israel later this month, and I hope that seeing the rest of the tribe enthused and excited about these problems will re-inspire him. It will also show him that people are interested in what he is dedicating his time to.

Du Sautoy is a softy! I’d throw such students out of the window…