Ever tried a chess problem like : White to move, mate in two! Of course you have, and these are pretty easy to solve : you only have to work through the finite list of white first moves and decide whether or not black has a move left preventing mate on the next white move. This is even a (non-optimal) fool-proof algorithm to find the solution to this kind of chess problems. Right?

Well, some moves are legal only depending on the history of the game. For example, you are only allowed to do a castling if your king nor your rook made a prior move. Further, you can only make an en-passant-capture on the next move.

But surely all this is just theoretical? No-one ever constructed a provable 2-mate with impossible winning move. Wrong again. The logician Raymond Smullyan did precisely that in his retro-chess puzzle book Chess mysteries of Sherlock Holmes. Here’s the position : 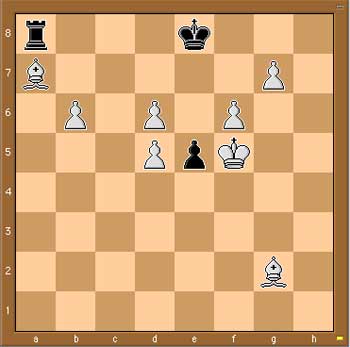 Presumably every chess player goes for the mate : 1. Kf5-e6 2. g7-g8D But what if black counters your first move with a castling 1. … 0-0-0 ? Surely he isnt allowed to do this. Why not, is there any clue in the position to prove that either the king or the rook must have moved before?

Well, what was black previous move then? It cannot be the pawn move e6-e5 as before that move the white King would be in check, so what was it? Just one possibility left : it must have been e7-e5.

Hence, whatever the games’ history, white has a mate in two! However, looking ONLY at the given position, it is impossible for him to judge whether Kf5-e6 will do the trick!

According to the wikipedia page on Retrograde chess analysis, the Smullyan-idea is an adaptation of a much older problem due to W. Langstaff in the Chess Amateur of 1922. Here’s the situation (the solution is the same as above) 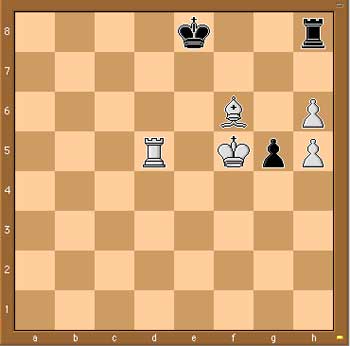