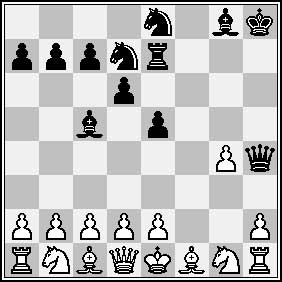 Noam D. Elkies is a
Harvard mathematician whose main research interests have to do with
lattices and elliptic curves. He is also a very talented composer of
chess problems. The problem to teh left is a proof game
in 14 moves. That is, find the UNIQUE legal chess game leading to the
given situation after the 14th move by black. Elkies has also written a
beautiful paper On Numbers
and Endgames applying combinatorial game theory (a la Winning
Ways!) to chess-endgames (mutual Zugzwang positions correspond to zero
positions) and a follow-up article Higher Nimbers in pawn
endgames on large chessboards. Together with Richard Stanley he wrote a
paper for the Mathematical Intelligencer called The Mathematical
Knight which is stuffed with chess problems! But perhaps most
surprising is that he managed to run his own course on Chess and
Mathematics!