Where was the Bourbaki wedding?

I’m pretty certain I got the intended date & time of the Bourbaki-Pétard wedding right : June 3rd 1939 at 12h.
Finding the exact location of the wedding-ceremony is an entirely different matter. And, quite probably, we are reading way too much in these pranks of the Weil-clan.

Still, it’s fun trying to find an elegant answer, based on the (intended or imagined) clues in the text and the little we know about the early Bourbaki-days. Here, the translation of the relevant part of the wedding announcement :

“They will receive the trivial isomorphism from P. Adic, of the Order of the Diophantines, in the Principal Cohomology of the Universal Variety, on the third of Cartember, year VI, at the usual hour.
The organ will be played by Monsieur Modulo, Assintant Simplex of the Grassmannian (with lemmas sung by the Scholia Cartanorum). The collection will be donated in full to the retirement home for Poor Abstracts. Convergence will be guaranteed.”

First solution : Perhaps one might read “in the Principal Cohomology of the Universal Variety” as : “in the Principal Church of the generic type/name”. In many French cities the main church is the Cathedral and an awful lot of them are called Notre Dame, so it might mean : in the Notre Dame Cathedral. But even then, we have to choose between these two 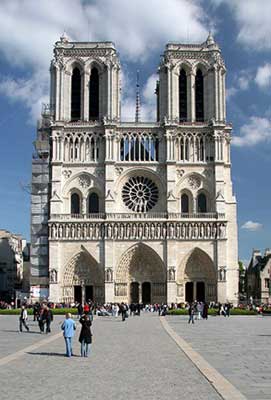 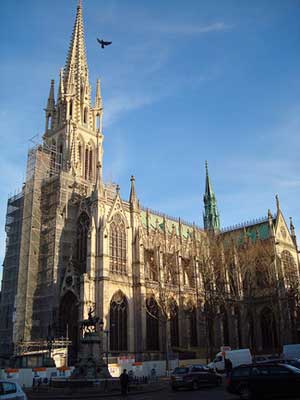 On the left, the Notre Dame Cathedral in Paris. On the right the Cathédrale Notre-Dame-de-l’Annonciation in Nancy. As the invitation promises guests to be entertained after the ceremony by Monsieur et Madame Bourbaki at their ‘Fundamental Domains’, the choice depends on the location of the Bourbaki-household in June 1939.

‘Bourbaki’ made two applications to become an AMS-member. The first, in 1948, tells us that Bourbaki is a scientific advisor to the Hermann Publishing Co. in Paris since 1934, and, the second in 1950, that he is ‘Directeur Libre de Recherches a l’Université de Nancy’.
I couldn’t find out when exactly Nicolas did change cities, and even Liliane Beaulieu’s talk Bourbaki a Nancy does not provide an answer.

Second solution : Or, one can read that sentence as a mathematical, perhaps proto-motivic, statement, and, hunt for clues elsewhere in the text. But then, what are these clues? 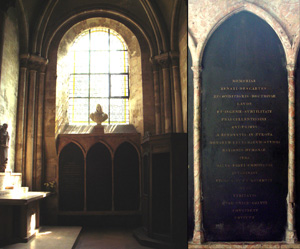 Let’s consider “Scholia Cartanorum” more closely. It may be Latin, admittedly very bad Latin, for ‘the Scholiums of Cartesius’, that is, ‘of Descartes‘.

One of the more famous ‘Scholia’ in scientific history is Newton’s general scholium to the Principia, which is a prime example of Descartes-bashing. Newton attacks Descartes on his vortical theory of planetary motion, his aeter to explain gravity, his God-axiom (unlike Descartes, Newton induced God from nature, rather than starting with God as an axiom) and his hypothetico-deductive method. So, there is a link between Descartes and ‘Scholium’, although the genitive form ‘Cartesiorum’ might be fairly inappropriate…

But then, Descartes died on 11 February 1650 in Stockholm (Sweden) where he was buried, so there won’t be a connection to a French or Parisian church, right? Well, not quite. The fate of Descartes’ remains is a rather strange story : “In 1666, sixteen years after his death, the bones of René Descartes
were dug up in the middle of the night and transported from Sweden to
France under the watchful eye of the French Ambassador. This was only
the beginning of the journey for Descartes’ bones, which, over the
next 350 years, were fought over, stolen, sold, revered as relics,
studied by scientists, used in séances, and passed surreptitiously
from hand to hand. ” For example, during the French Revolution, his remains were disinterred for burial
in the Pantheon in Paris among the great French thinkers. But today, his ashes are burried in… 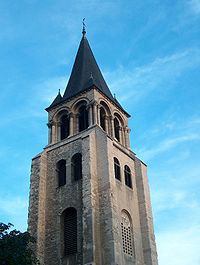 the abbay church of Saint-Germain-des-Prés, located in the Quartier Latin, within walking distance of the Bourbaki-café Capoulade and the Ecole Normal Superieure.

Now all the hints fall handsomely in place. St-Germain-des-Prés is the oldest church in Paris. Parts of it date to the 6th century, when a Benedictine abbey was founded on the site by Childebert, son of Clovis. Hence the sentence ‘in the Principal Cohomology of the Universal Variety’ might simply mean ‘in the first church, ever’. In medieval times, the Left Bank of Paris was prone to flooding from the Seine, so much of the land could not be built upon and the Abbey stood in the middle of fields, or prés in French, thereby explaining its appellation.

The other part of its name, Saint Germain, comes from Saint Germanus of Paris, also known as the ‘father of the poor’ (!). His remains were interred in St. Symphorien’s chapel in the vestibule of St. Vincent’s church, but in 754, when he was canonized, his relics were solemnly removed into the body of the church, in the presence of Pepin and his son, Charlemagne, then a child of seven, and the church was reconsecrated as Saint-Germain-des-Prés. That is, also the remains of the ‘father of the poor’ are buried in this church.

Here’s my best guess : the Bourbaki-Pétard wedding was held on June 3rd 1939 in the church Saint-Germain-des-Prés at 12h. Genuine aficionados of the Da Vinci code may regret it wasn’t held in the neighboring Saint-Sulpice church, but then, perhaps someone can bend the clues accordingly…

Remains this problem : who was the organist, Monsieur Modulo? Suggestions anyone?