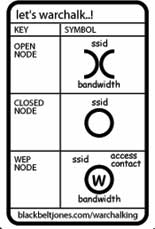 What then is all this WarWalking, WarDriving,
WarChalking and so on? In particular, why the aggressive
War-word in them ? From what I learned, the historical origin of
these terms comes from the 1983 movie “War Games” in which a
kid sets up his modem to dial numbers until it finds a computer to hack
leading inevitably to the US-army in total panic. This hobby created the
phrase WarDialing. In analogy, a person driving around in a car
with a laptop in search for wireless networks is said to be
WarDriving, if (s)he is on foot it is clearly WarWalking.
Because of the aggressive nature of the War-subword some people have
re-engineered an explanation :

so let us hope this acronym
will catch on. Now then, what is WarChalking ? It was invented by
Matt Jones and the idea is that a WarWalker should write a symbol in
chalk on the wall nearest to the discovered Access Point describing its
nature (see picture on the left) : the first sign depicts an open
node, the next a closed one and the last one is a node with
WEP-protection (btw. WEP=Wired Equivalent Privacy). A lot
of people seem to take this fairly serious, there is even a webpage warchalking.org devoted to it on which you can
find a lot more information. And as warchalking was originally British,
there had to be also an American site containing among other things a not
that active forum. Further, the unofficial HOW-TO of WarDriving may be
interesting. To me it all sounds as an excuse to buy a
GPS-receiver and a
laptop…