So, you did jailbreak your iTouch and did install some fun or useful stuff via the Install.app … but then, suddenly, the next program on your wish-list fails to install ??!! I know you hate to do drastic things to your iTouch, but sooner or later you’ll have to do it, so why not NOW?

The problem is that there are two disk partitions (a small one, meant only to host the apple-software and a large one to contain all your music, videos and stuff) and Install.app installs programs in the /Apllications folder on the smaller partition. So, we want to move it to the other partition using a symbolic link trick (as in the wiki-hack post). Here a walkthrough, more details can be found on Koos Kasper’s site.

From now on, all (most) new programs are installed on the larger partition. If you reinstall the OpenSSH application (as suggested) make sure to remove on your computer the old key for iTouch.

I use the iTouch to read my mail, to read RSS feeds, to administer this blog, to VNC to the home-server and when needed to ssh into the computer at work (running this blog) to restart the apache server. Unless I have to write a lot, there is no need to fire up a computer… But, when someone has a Mac running, I would like to be able to stream the music on my iTouch to hear it loudly. Here’s the procedure, via Rupert Gee’s blog : 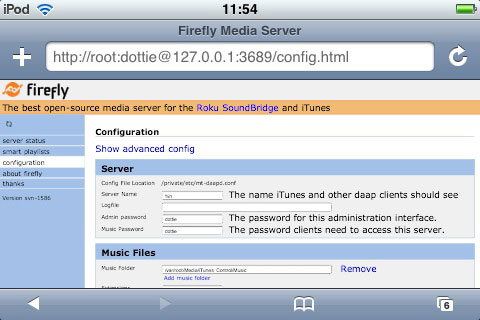