I got
Tracks working under Tiger by trial and error starting with a suggestion
from Jan who found a fix here. From this I stumbled on for an hour or so on my iMac
untill near the very end I found that the tracks-page itself now
has a Tiger-section. So, let’s try to do it all over again from fresh on
my regular machine (a little iBook).

Start with
this page and read it all the way to the comments. There is a
comment by Jamie on installing Rails and MySQL on a fresh Tiger which
looks like the thing I want followed immediately by another post by Jose
Marinez on
Installing Ruby on Rails on Tiger which I decided to follow by the
letter (with one noticeable exception!). So first I downloaded the Rails
installer on Tiger. Next, an install of the Standard version of
MySQL. I used version 4.0 for OS
X 10.3 !!!! NOT 4.1 !!!!. I installed MySQL and the StartUpItem.
Next, I opened Terminal and typed the following commands

and verified it by performing a
simple test

Next, I
secured everything by having a root-password

Also, I want
to admin MySQL via phpmyadmin so I
installed it. Then I enabled my webserver to use PHP using this post though I
did use vi rather than pico! Next, i did a check whether everything
worked fine by typing in safari

Now, it is time to get the Tracks-package
and to follow these instructions And, it works! Here is the proof : 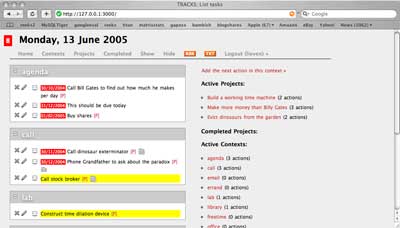