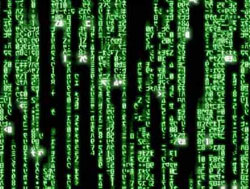 The dinosaurs among you may remember that before this blog we had the ‘na&g-forum’ to accompany our master-class in noncommutative algebra & geometry.

That forum ran on an early flat-panel iMac G4 which was, for lack of a better name, baptized ‘the matrix’.

The original matrix did survive the unification of the three Antwerp universities and a move to a different campus but then died around bloomsday 2007 and was replaced by an intel iMac.

This second matrix did host a number of blogs and projects started (and usually ended rather quickly) such as ‘MoonshineMath’, a muMath-site called noncommutative.org, the ‘F-un Mathematics’ blog dedicated to the field with one element and, of course, this blog.

About a month ago matrix-II was replaced by a state-of-the-art iMac running 10.7. The transition went smooth apart from the fact that 10.7 doesn’t like ‘localhost’ but prefers ‘127.0.0.1’ in setting up wordpress blogs.

Besides neverendingbooks, matrix-III runs angs@t – angs+ which is the blog of the antwerp noncommutative geometry seminar. It will be revamped over the summer and will probably be the website for our renewed master-class, starting next year.

The ‘F-un Mathematics’ blog was dropped in the transition but still survives at Ghent University where it is managed by Koen Thas.

As far as NeverendingBooks is concerned i hope to make a fresh start with blogging and will try to get more structure in this site by changing to a responsive wordpress theme (‘These responsive, fluid, or adaptive WordPress themes, automatically adjust according to the screen size, resolution and device on which they are being viewed’).

As a result this page will look weird from time to time over the next week or so. My apologies.