The martial art of giving talks

Last fall, Matilde Marcolli gave a course at CalTech entitled Oral Presentation: The (Martial) Art of Giving Talks. The purpose of this course was to teach students “how to effectively communicate their work in seminars and conferences and how to defend it from criticism from the audience”.

The lecture notes contain basic information on the different types of talks and how to prepare them. But they really shine when it comes to spotting the badasses in the public and how to respond to their interference. She identifies 5 badsass-types : the empreror and the hierophant (see below), the chariot (the one with a literal mind, asking continuously for details), the fool (the one who happens to sit in the talk but doesn’t belong there) and the magician (the quick smartass).

I’ll just quote here the description of, and most effective strategy against, the first two badass-types. Please have a look at the whole paper, it is a good read!

“The Emperor is the typical figure of power and authority in a given field. It refers to those people who have a tendency to think that the whole field is their own private property, and in particular that only what they do in the field is important, that the work of all others is derivative and that in any case they are not being quoted enough. These are typically pathological narcissists, so one needs to take this into account in interacting with them.
The trouble of having The Emperor in your audience is that he (it is rarely she) can very easily disrupt your presentation completely, by continuous interruptions, by running his own commentary while you are trying to stay focused on delivering your talk and by distracting the rest of the audience.
The Emperor is by far one of the most dangerous encounters you can make in the wilderness of the conference rooms.”

Counter-measure : “Keep in mind that the Emperor is a pathological narcissist: part of the reason why he keeps interrupting your talk is because he cannot stand the fact that, during those fifty minutes, the attention of the audience is focused on you and not on him. His continuous interruptions and complaints are a way to try to divert the attention of the audience back to him and away from you. That your talk gets disrupted in the process, he could not care the less.
A good way to try to avoid the worst case scenario is to make sure (if you know in advance you may be having the Emperor in the audience) that you arrange in your talk to make frequent references to him and his work. In this way, he will hopefully feel that his need to be at the center of attention is sufficiently satisfied that he can let you continue with your talk. Effectiveness: high.” 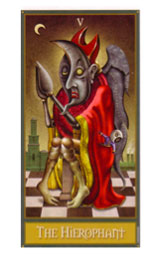 “The Hierophant represents a priestly figure. What this refers to here is the type of character who feels entitled to represent (and defend) a certain “orthodoxy”, a certain school of thought, or a certain group of people within the field.
Typically the hierophants are the minions and lackeys of the Emperor, his entourage and fan club, those who think that the Emperor represents the only and true orthodoxy in the field and that anything that is done in a different way should be opposed and suppressed.
These characters are generally less disruptive than the Emperor himself, as they are really only fighting you on someone else’s behalf. Nonetheless, they can sometime manage to seriously disrupt your presentation.”

Counter-measure : “This is essentially the same advise as in the case of the Emperor. To an objection that substantially is of the form: “This is not the right way to do things because this is not what what we do (= what the Emperor does)”, which is what you expect to hear from the Hierophant, you can reply along lines such as: “There is also another approach to this problem, developed by the Emperor and his school, which is a very interesting approach that gave nice and important results. However, this is not what I am talking about today: I am talking here about a different approach, and I will be focusing only on the specific features of this other approach…”
Something along these lines would recognize “their” work without having to make any concession on their approach being the only game in town.
Effectiveness: high (unless the Emperor is also present and is delegating to his hierophants the task of attacking you: in that case they won’t give up so easily and the effectiveness of this line of defense becomes medium/low).”