the bumpy road to the first Bourbaki congress

The first Bourbaki congress took eventually place in Besse-en-Chandesse. But, its organization suffered from the ‘usual’ inter-departemental fighting, and also from a power-struggle within the group itself. On many issues de Possel and André Weil were on opposite sides, and it didn’t really help that there was a woman involved…

Because Mandelbrojt, de Possel and Coulomb all held a position at the University Blaise Pascal of Clermont-Ferrand I assumed that the Bourbaki-group had no problem procuring the universities’ biology-outpost in Besse-en-Chandesse for their first congress in 1935. However, the relevant Bourbaki files tell a different story. As might have been expected, the project suffered from the ‘usual’ inter-departemental fighting, but also from a power-struggle within the group itself. 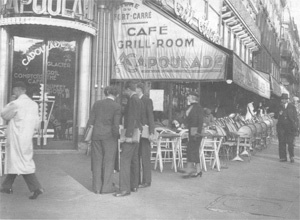 An excellent account of the first 10 ‘proto-Bourbaki’ meetings in the Capoulade-Café, 63 boulevard Saint- Michel, is told magnificently by Liliane Beaulieu in her 1993 paper A Parisian Café and Ten Proto-Bourbaki Meetings(1934-1935). Here we will concentrate on the preparations of the Besse congress. 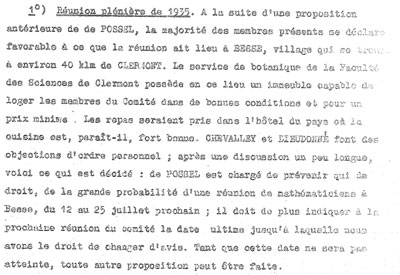 On march 25th 1935, the first precise plans are made about the location, the lodgings and the extremely important issue of the meals which will be taken in a nearby Hotel of which “la cuisine est, parait-il, fort bonne”.

René de Possel obtained a mandate to do whatever it took for the group to have their congress in Besse between 12 and 25 July, and, to enquire until what date they could still change their mind.
His biography contains the following lines :
“On many issues de Possel and André Weil were on opposite sides in the arguments. At the first Bourbaki congress in July 1935 de Possel was still an active member of the group and much involved with contributing but, largely due to differences with Weil, he dropped out of the project. De Possel married Yvonne Liberati on 12 August 1935; they had three children, Yann, Maya, and Daphné.”

By and large, the Bourbaki-differences between de Possel and Weil were of a professional nature. They had different mathematical interests, different mathematical talents, different ambitions, and, a different level of commitment wrt. the work ahead (Weil being the lazier one of the two). Still, it is difficult to understand the group-dynamics of the first generation Bourbakis without mentioning a personal tragedy, often ‘forgotten’ (as in the above biography) or given no more than half a sentence, in passing… 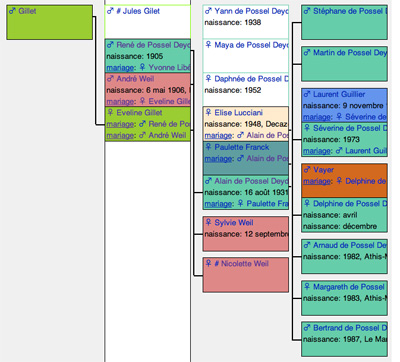 Aged 24, René de Possel marries Evelyne Gillet in 1929 and their son, Alain, is born on august 16th 1931. However, the marriage breaks up, one account dates the separation in 1933, another around the time of the Besse conference in 1935.

What is certain is that Evelyne Gillet and André Weil start a relationship no later than the autumn of 1935. At that time, Weil is concocting the Bourbaki Comptes-Rendus note and as the Academy demands a short biography of the author, he has to come up with a first name (at the Besse conference, they only decided on the name ‘N. Bourbaki’). Evelyne chooses Nicolas and is referred to ever after as ‘Bourbaki’s godmother’. Early 1936, the couple spends a vacation together in Spain.

Early 1937, the official divorce papers come through, allowing Weil and Evelyne to marry on october 30th 1937. The very same year, René de Possel remarries with Yvonne Liberati. For more information, you can traverse Evelyne’s genealogy-tree here, but bear in mind that not all information is included (for example, Evelyne died on may 24th, 1986).

Contrary to the suggestion made in the biography, there is no evidence that de Possel left the Bourbaki-group as a result of this affaire or because of his arguments with Weil. In fact, at least until the second Chançay-congress in 1937, de Possel was one of the hardest workers in the group, present at all meetings, doing his share of the write-up and even chastising his fellow-Bourbakis for not being as committed to the project as they ought to be, see for example the 7 theses of Chançay document. It was only in the fall of 1941 that de Possel asked to be transferred to the university of Algiers and left the Bourbaki-group. 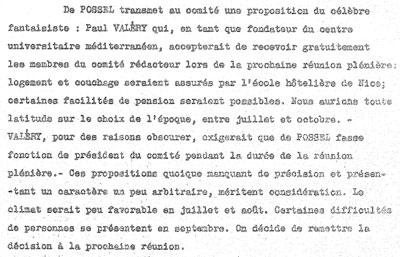 At the meeting of march 25th 1935, de Possel attempts a coup d’état. He comes up with an entirely new plan for the summer-congress. Paul Valéry, the French poet, essayist, and philosopher (in the notules he is described as ‘le célebre fantaisiste’) proposed the Bourbaki-group to use his ‘centre universitaire mediterranéen’ (the proto-University of Nice) as their place of venue. They could choose any period between july and october and they wouldn’t have to pay a thing! de Possel was in contact with Valéry at that time, he was writing a 44 page booklet on game theory Sur la théorie mathématique des jeux de hasard et de réflexion, with a preface by Paul Valéry, which appeared later in 1937 via Valéry’s center for mediterranean studies.

There is one small catch though … Valéry insists that de Possel should be president of the Bourbaki-group during the meeting! Naturally, this wasn’t received enthusiastically by the others, but they didn’t rule the plan out, requesting additional information and observing that july and august may be way too hot in Nice.

The next meeting (May 6th 1935), de Possel tries to increase the pressure by asserting that the original Besse-plan is in danger because “Les naturalistes de Clermond-Ferrand semblent vouloir se servir de ce qui leur appartient” (the biologists of Clermond-Ferrand want to use their facilities themselves). But the others are not impressed and they give de Possel “pleins pouvoirs pour réagir avec violence.”

Putsch averted, the Bourbakis can start packing their suitcases, hire a secretary for the meeting, and split the costs among all committee-members. Because even this circulaire is preserved, we now know such trivia as the cost of full-pension in the Besse-Hotel with the excellent kitchen : 25 Ffr/day…