the birthday of Grothendieck topologies

This is the story of the day the notion of ‘neighbourhood’ changed forever (at least in the geometric sense).

For ages a neighbourhood of a point was understood to be an open set of the topology containing that point. But on that day, it was demonstrated that the topology of choice of algebraic geometry, the Zariski topology, needed a drastic upgrade.

This ultimately led to the totally new notion of Grothendieck topologies, which aren’t topological spaces at all.

Formally, the definition of Grothendieck topologies was cooked up in the fall of 1961 when Grothendieck visited Zariski, Mike Artin and David Mumford in Harvard.

But, paradigm shifts like this need a spark, ‘une bougie d’allumage’, and that moment of insight happened quite a few years earlier.

It was a sunny spring monday afternoon at the Ecole Normal Superieure. Jean-Pierre Serre was giving the first lecture in the 1958 Seminaire Claude Chevalley which that year had Chow rings as its topic. 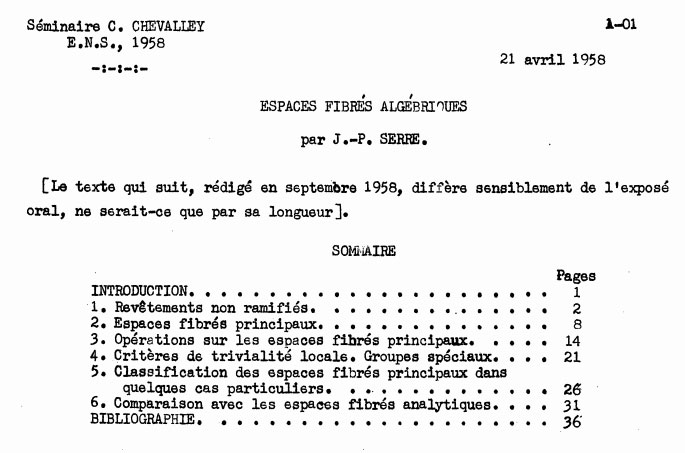 He had run into a problem.

If a Lie group $G$ acts freely on a manifold $M$, then the set of $G$-orbits $M/G$ is again a manifold and the quotient map $\pi : M \rightarrow M/G$ is a principal $G$-fibre bundle meaning that for sufficiently small open sets $U$ of $M/G$ we have diffeomorphisms

The reason being that the Zariski topology on $X/G$ is way too coarse, it doesn’t have enough open sets to enforce this local product property.

But, Serre had come up with a solution.

He was going to study fibre bundles which were locally ‘isotrivial’, meaning that they had the required local product property but only after extending them over an unamified cover $Y \rightarrow X$ (what we now call, an etale cover) and he was able to clasify such fibre bundles by a laborious way (which we now call the first etale cohomology group).

The story goes that Grothendieck, sitting in the public, immediately saw that these etale extensions were the correct generalization of the usual (Zariski) localizations and that he could develop a cohomology theory out of them in all dimensions.

According to Colin McLarty Serre was ‘absolutely unconvinced’, since he felt he had ‘brutally forced’ the bundles to yield the $H^1$’s.

We will never known what Serre actually wrote on the blackboard on april 21st 1958.

The above scanned image tells it is an expanded version of the original talk, written up several months later after the ICM-talk by Grothendieck in Edinburgh.

By that time, Grothendieck had shown Serre that his method indeed gives cohomology in all dimensions,and convinced him that this etale cohomology was likely to be the “true cohomology needed to prove the Weil conjectures”.