Via the Arcadian functor I’ve grabbed the full text of Gil Kalai’s book Gina Says: Adventures in the Blogsphere String War (part 1 and part 2) and read it on a lazy sunny afternoon.

Arguably the best paragraph is the final one, and, it might be sensible to start the book by reading it first as it clarifies Kalai’s point in collecting these comment-threads from a number of popular blogs (including not even wrong, the n-category cafe and asymptotia) :

This book is not about string theory. It is more about delicate boundaries
between greatness and megalomania, between humility and arrogance,
between fantasy and reality, between wisdom and bullshit, between
people of different stature and standing, between skepticism and
harassment, between sanity and its loss, and between truths and fallacies.
These are delicate boundaries that we witness in academics and in science
and even in blog discussions. This story offers a little salute to people’s
passion for understanding their logical and physical reality, as well as for
understanding themselves.

It all started with this comment on the noncommutative geometry blog by “gabriel” :

Even though my understanding of noncommutative geometry is limited, there are some aspects that I am able to follow.
I was wondering, since there are so few blogs here, why don’t you guys forge an alliance with neverending books, you blog about noncommutative geometry anyways. That way you have another(n-category cafe) blogspot and gives well informed views(well depending on how well defined a conversational-style blog can be).

The technology to set up a ‘conversational-style blog’, where anyone can either leave twitter-like messages or more substantial posts, is available thanks to the incredible people from Automattic.

For starters, they have the sensational p2 wordpress theme : “blogging at the speed of thought”

A group blog theme for short update messages, inspired by Twitter. Featuring: Hassle-free posting from the front page. Perfect for group blogging, or as a liveblog theme. Dynamic page updates. Threaded comment display on the front page. In-line editing for posts and comments. Live tag suggestion based on previously used tags. A show/hide feature for comments, to keep things tidy. Real-time notifications when a new comment or update is posted. Super-handy keyboard shortcuts.

Next, any lively online community is open for intense debate : “supercharge your community”

Fire up the debate with commenter profiles, reputation scores, and OpenID. With IntenseDebate you’ll tap into a whole new network of sites with avid bloggers and commenters. And that’s just the tip of the iceberg!

And finally, as we want to talk math, both in posts and comments, they provide us with the WP-LaTeX plugin.

All these ingredients make up the n-geometry cafe ((with apologies to the original cafe but I simply couldn’t resist…)) to be found at noncommutative.org (explaining the ‘n’).

Anyone can walk into a Cafe and have his/her say, that’s why you’ll get automatic author-privileges if you register.

Fill in your nick and email (please take your IntenseDebate setting and consider signing up with Gravator.com to get a nice image next to your contributions), invent your own password, show that you’re human by answering the reCapcha question and you’ll get a verification email within minutes ((if you don’t get an email within the hour, please notify me)). This will take you to your admin-page, allowing you to start blogging. For more info, check out the FAQ-pages.

I’m well aware of the obvious dangers of non-moderated sites, but also a strong believer in any Cafe’s self-regulating powers…

Probably the smartest move I’ve made after entering math-school was to fall in love with a feminist.

Yeah well, perhaps I’ll expand a bit on this sentence another time. For now, suffice it to say that I did pick up a few words in the process, among them : the queen bee syndrome :

women who have attained senior positions do not use their power to assist struggling young women or to change the system, thereby tacitly validating it.

likely stems from women at the top who feel threatened by other women and therefore, prefer to surround themselves with men. As a result, these Queen Bees often jeapordize the promotions of other females at their companies.

Women who fought their way to the top, they said, were convinced that overcoming all obstacles along the way made them into the strong persons they became. A variant on the ‘what doesn’t kill you, makes you stronger’-mantra, quoi. These queen bees genuinely believed it to be beneficial to the next generation of young women not to offer them any shortcuts on their journey through the glass ceiling.

But, let’s return to mathematics.

By and large, the 45+generation decides about the topics that should be (or shouldn’t be) on the current math-curriculum. They also write most of the text-books and course-notes used, and inevitably, the choices they make have an impact on the new generation of math-students. 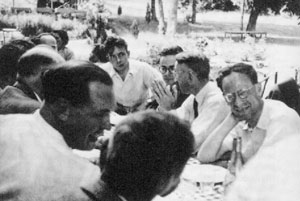 Perhaps too little thought is given to the fact that the choices we (yes, I belong to that age group) make, the topics we deem important for new students to master, are heavily influenced by our own experiences.

In the late 60ties, early 70ties, Bourbaki-style mathematics influenced the ‘modern mathematics’ revolution in schools, certainly in Belgium through the influence of George Papy.

In kintergarten, kids learned the basics of set theory. Utensils to draw Venn diagrams were as indispensable as are pocket-calculators today. In secondary school, we had a formal axiomatic approach to geometry, we learned abstract topological spaces and other advanced topics.

Our 45+generation greatly benefitted from all of this when we started doing research. We felt comfortable with the (in retrospect, over)abstraction of the EGAs and SGAs and had little difficulties in using them or generalizing them to noncommutative levels…

Bourbakism made us into stronger mathematicians. Hence, we are convinced that new students should master it if they ever want to do ‘proper’ research.

Perhaps we pay too little attention to the fact that these new students are a lot worse prepared than we were in the old days. Every revolution inevitably provokes a counter-revolution. Secondary school mathematics sank over the last two decades to a debilitating level under the pretense of ‘usability’. Tim Gowers has an interesting Ivory tower post on this.

We may deplore this evolution, we may try to reverse it. But, until we succeed, it may not be fair to freshmen to continue stubbornly as if nothing changed since our good old days.

Perhaps, Bourbakism has become our very own queen bee syndrome… 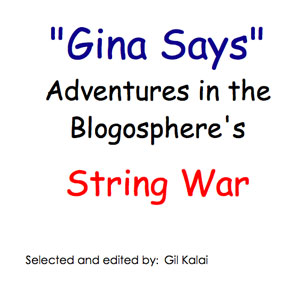 Boy, do I feel stupid for having written close to 500 blog-posts hoping (in vain) they might eventually converge into a book project…

Gil Kalai is infinitely smarter. Get a fake gmail account, invent a fictitious character and start COMMENTING and provoking responses. That’s how “Gina” appeared on the scene, cut and pasted her comments (and the replies to them) and turned all of this into a book : “Gina says”, Adventures in the Blogsphere String War.

So, who’s Gina? On page 40 : “35 years of age, Gina is of Greek and Polish descent. Born in the quaint island of Crete, she currently resides in the USA, in quiet and somewhat uneventful Wichita, Kansas. Gina has a B.Sc in Mathematics (from the University of Athens, with Honors), and a Master’s Degree in Psychology (from the University of Florence, with Honors).
Currently in-between jobs (her last job was working with underprivileged children), she has a lot of free time on her hands, which gives her ample opportunities to roam the blogosphere.”

So far, the first 94 pages are there to download, the part of the book consisting of comments left at Peter Woit’s Not Even Wrong. Judging from the table of contents, Gina left further traces at the n-category cafe and Asymptotia.

Having read the first 20 odd pages in full and skimmed the rest, two remarks : (1) it shouldn’t be too difficult to borrow this idea and make a much better book out of it and (2) it raises the question about copyrights on blog-comments…

If the noncommutative geometry blog could be persuaded to awake from its present dormant state, I’d love to get some discussions started, masquerading as AG. Or, given the fact that I’ll use the summer-break to re-educate myself as an n-categorist, the guys running the cafe are hereby warned…

Last time I promised to come back explaining how to set-up LaTeX-support, figuring I had to tell you about a few modifications I had to make in order to get Latexrender run on my mac…

A few google searches made it plain how out of touch I am on these matters (details below). But first, there was this comment to this series by Link Starbureiy :

“I took part in Gowers’ blog discussion. My input was to move things over to Google collaboration tools, like Google Knol, and perhaps Google Sites. However, those tools for large-scale collaboration may not be the best solution anymore. I like the NSN idea, but worry about it’s very long-term stability. Would you consider porting the project over to the Google App Engine so that it can be played with in the orkut sandbox (http://sandbox.orkut.com)?”

I thought I made it clear from the outset that I didn’t want to spend the rest of my life web-mastering a site such as NSN. All I wanted to show is that the technology is there free for the taking, and show that you do not have to be a wizard to get it running even on a mac…

I would really love it when some groups, or universities, on institutes, would set up something resembling this dedicated to a single arXiv-topic. Given our history, Antwerp University might be convinced to do this for math.RA but (a) I’m not going to maintain this on my own and (b) there may very well be a bandwidth problem if such a thing would become successful… (although, from past experiences and attempts I’ve made over the years, this is extremely unlikely for this target-group).

So please, if your group has some energy to spare, set-up your own math2.0-network, port it to Google Apps, Knol, Orkut or whatever, and I’d love to join and contribute to it.

As to LaTeX-support : this is trivial these days. First you need a working LaTeX-system on your virgin macbook. The best way is to download The MacTeX-2008 Distribution at work (it is a huge 1.19Gb download…). Next, install the fauxml-wordpress plugin (that is, download it to YourHome/Downloads and then drag the file faux-ml.php to the Library/WebServer/Documents/wp-content/plugins/ directory. Next, install likewise the WP-LateX plugin following the instructions, go to the configuring page and set the directory for latex and dvipng (if you follow my instructions they should be located at /usr/texbin/latex and /usr/texbin/dvipng), fill in the text color and background color you desire and clip your default latex-documentstyle/includepackages/newcommands section from your latest paper into the LaTeX Preamble window and believe me, you’re done!!! 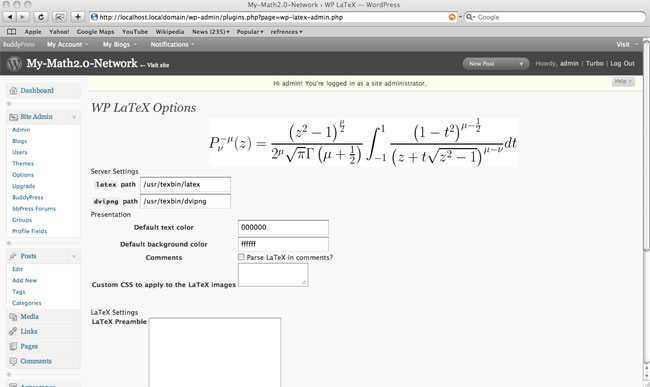