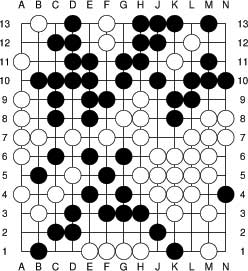 The
game of SNORT was invented by Simon Norton. The
rules of its SNORTgo-version are : black and white take turns in
putting a stone on a go-board such that no two stones of different
colour occupy neighbouring spots. In contrast to COLgo it is a
hot game meaning that many of its positions are non-numbers. The picture
on the left is a SNORTgo endgame of exact value

and is therefore a fuzzy game meaning that the first player to
move has a winning strategy. Can you find the best move for white? and
for black?

If not, you can always consult the slides of the talk I gave this afternoon for the
WIS-seminar. Afterwards there was a game playing
afternoon but I felt too tired and went home early.