SAGE
(which stands for ‘Software for Algebra and Geometry
Experimentation’) includes and offers an interface to GAP, Singular,
Maxima and even PARI as
well as an interface to other packages such as Maple, Magma and
Mathematica (see here
for a full list of its features). More importantly, Sage offers a binary
for both PPC and Intel-Macs! I did check this out and it runs without
problems, in fact, after this initial check I installed from the sources
on my MacBook Pro and after one hour of compiling I did have working
(though not full) versions of GAP, Maxima and Singular. At first I
was a bit worried that only small subsets of the three systems were
installed, but it is quite easy to extend your Sage with additional
packages. From the Unix-prompt do a sage -optional
and you will get a list of all (additional) packages you have already
installed and those available for installation. SAGE is pretty well
documented with tutorials and reference manual to be found here. Even if you do not want to learn (yet) the Sage-commands but just
want to continue using the programs under its hood, this is pretty easy.
For example, to get to Maxima, you only have to type
!maxima from the sage-prompt to open up a maxima-session
(and similarly for Gap and Singular). 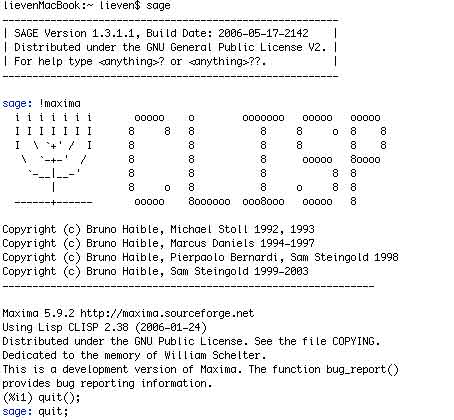 Bill
Schelter’s Affine-package is not included, but you can load and install
it from the maxima-prompt by load("affine.lisp"); but some
commands such as ‘fast_central_elements’ do not seem to
work as expected (or maybe I forgot the drill over the years, I’ll try
it out again).