The usual argument to show that the group of all orientation-preserving symmetries of the Klein quartic is the simple group $L_2(7)$ of order $168$ goes like this: 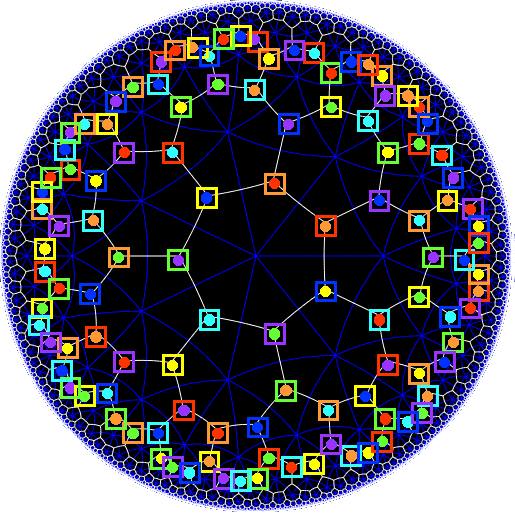 If you compare the two colour schemes, you’ll see that every truncated cube in the first family is disjoint from precisely $3$ truncated cubes in the second family.

That is, we can identify the truncated cubes of the first family with the points in the Fano plane $\mathbb{P}^2(\mathbb{F}_2)$, and those of the second family with the lines in that plane.

The Klein quartic consists of $24$ regular heptagons, so its rotation symmetry group consists of $24 \times 7 = 168$ rotations,each preserving the two families of truncated cubes. This is exactly the same number as there are isomorphisms of the Fano plane, $PGL_3(\mathbb{F}_2) = L_2(7)$. Done!

Here’s another ‘look-and-see’ proof, starting from Klein’s own description of his quartic. 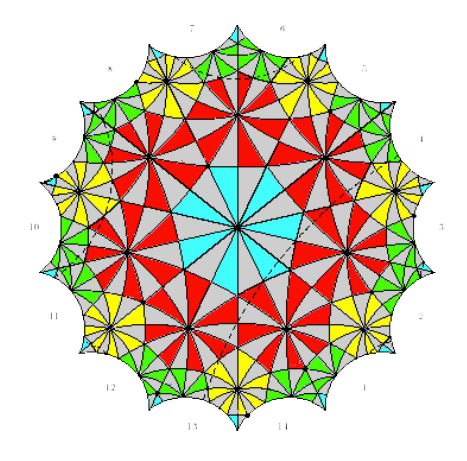 The two vertices of the edge shared by the blue and red heptagon are fixed by $g.h$ and $h.g$, respectively, so these rotations must have order three (there are $3$ heptagons meeting in the vertex).

That is, the rotation symmetry group $G$ of the Klein quartic has order $168$, and contains two elements $g$ and $h$ of order $7$, such that the subgroup generated by them contains elements of order $3$.

This is enough to prove that the $G$ must be simple and therefore isomorphic to $L_2(7)$!

The following elegant proof is often attributed to Igor Dolgachev.

If $G$ isn’t simple there is a maximal normal subgroup $N$ with $G/N$ simple .

The three $2$-Sylows are conjugated and so the conjugation morphism
\[
G \rightarrow S_3 \]
is non-trivial and must have image strictly larger than $C_3$ (otherwise, $G$ would have a normal subgroup of index $3$), so must be surjective.