return of the cat ceilidh

I couldn’t believe my eyes. I was watching an episode of numb3rs, ‘undercurrents’ to be precise, and there it was, circled in the middle of the blackboard, CEILIDH, together with some of the key-exchange maps around it… 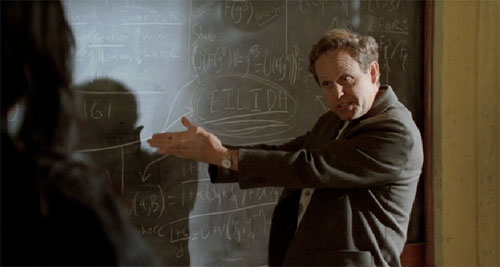 Only, the plot doesn’t involve any tori-crypto… okay, there is an I-Ching-coded-tattoo which turns out to be a telephone number, but that’s all. Still, this couldn’t just be a coincidence. Googling for ‘ceilidh+numbers‘ gives as top hit the pdf-file of an article Alice in NUMB3Rland written by … Alice Silverberg (of the Rubin-Silverberg paper starting tori-cryptography). Alice turns out to be one of the unpaid consultants to the series. The 2-page article gives some insight into how ‘some math’ gets into the script

Typically, Andy emails a draft of the
script to the consultants. The FBI plot
is already in place, and the writers want
mathematics to go with it. The placeholder “math” in the draft is often nonsense or
jargon; the sort of things people with no
mathematical background might find by
Googling, and think was real math. Since
there’s often no mathematics that makes
sense in those parts of the script, the best
the consultants can do is replace jargon
that makes us cringe a lot with jargon that
makes us cringe a little.

From then on, it’s the Telephone Game.
The consultants email Andy our suggestions (“replace ‘our discrete universes’
with ‘our disjoint universes’”; “replace
the nonsensical ‘we’ve tried everything
-a full frequency analysis, a Vignere
deconstruction- we even checked for
a Lucas sequence’ with the slightly less
nonsensical ‘It’s much too short to try
any cryptanalysis on. If it were longer
we could try frequency analyses, or try
to guess what kind of cryptosystem it is
and use a specialized technique. For example, if it were a long enough Vigenere
cipher we could try a Kasiski test or an
index-of-coincidence analysis’). Andy
chooses about a quarter of my sugges-
tions and forwards his interpretation
of them to the writers and producers.
The script gets changed, and then the
actors ad lib something completely dif-
ferent (‘disjointed universes’: cute, but
loses the mathematical allusion; ‘Kasiski
exam’ : I didn’t mean that kind of ‘test’).

She ends her article with :

I have mixed feelings about NUMB3RS. I still have concerns about the violence, the depiction of women, and the pretense
that the math is accurate. However, if NUMB3RS could interest people in the power of mathematics enough for society
to greater value and support mathematics teaching, learning, and research, and
motivate more students to learnthat would be a positive step.

Further, there is a whole blog dedicated to some of the maths featuring in NUMB3RS, the numb3rs blog. And it was the first time I had to take a screenshot of a DVD, something usually off limits to the grab.app, but there is a simple hack to do it…