Reineke’s observation that any projective variety can be realized as a quiver Grassmannian is bad news: we will have to look at special representations and/or dimension vectors if we want the Grassmannian to have desirable properties. Some people still see a silver lining: it can be used to define a larger class of geometric objects over the elusive field with one element $\mathbb{F}_1$. 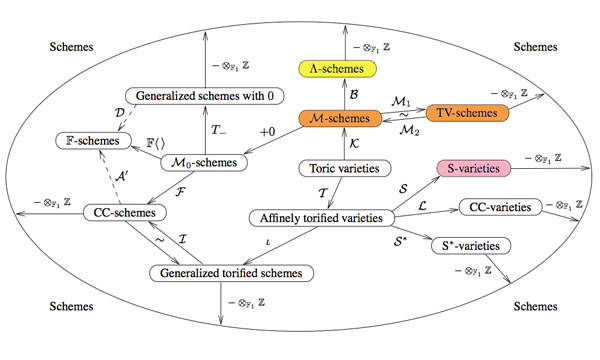 In a comment to the previous post Markus Reineke recalls motivating discussions with Javier Lopez Pena and Oliver Lorscheid (the guys responsable for the map of $\mathbb{F}_1$-land above) and asks about potential connections with $\mathbb{F}_1$-geometry. In this post I will ellaborate on Javier’s response. 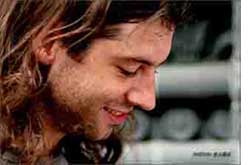 Oliver Lorscheid developed his own approach to $\mathbb{F}_1$ based on the notion of blueprints (see also part 2 and a paper with Javier).

Roughly speaking a blueprint $B = A // \mathcal{R}$ is a commutative monoid $A$ together with an equivalence relation $\mathcal{R}$ on the monoid semiring $\mathbb{N}[A]$ compatible with addition and multiplication. Any commutative ring $R$ is a blueprint by taking $A$ the multiplicative monoid of $R$ and $\mathcal{R}(\sum_i a_i,\sum_j b_j)$ if and only if the elements $\sum_i a_i$ and $\sum_j b_j$ in $R$ are equal.

One can extend the usual notions of prime ideals, Zariski topology and structure sheaf from commutative rings to blueprints and hence define a notion of “blue schemes” which are then taken to be the schemes over $\mathbb{F}_1$.

For us, old-fashioned representation theorists, a complex quiver-representation $V$ is defined over $\mathbb{F}_1$ if and only if there is an isomorphic representation $V’$ with the property that all its arrow-matrices have at most one $1$ in every column, and zeroes elsewhere.

For example, by modifying the map $h$ of last time to $h=x_0+x_7+x_9$ we get that the quiver-representation

is defined over $\mathbb{F}_1$ and hence that Reineke’s associated quiver Grassmannian, which is the smooth plane elliptic curve $\mathbb{V}(x^3+y^2z+z^3)$, is a blue variety. This in sharp contrast with other approaches to $\mathbb{F}_1$-geometry which do not allow elliptic curves!

Oliver will give a talk at the 6th European Congress of Mathematics in the mini-symposium Absolute Arithmetic and $\mathbb{F}_1$-Geometry. Judging from his abstract,he will also mention quiver Grassmannians.