For
someone as clumsy as me, it is no real surprise to loose one in three
hard disks, but what happened yesterday was a bit puzzling at first. I
tried to replace the original 4 Gb hard disk of an original iMac (a tray
loading iMac) following the instructions of the MacWorld : how to upgrade an iMac-page I used last
time together with Jan to replace two hard disks in slot-loading iMacs.
The whole process is a bit scary : unplug 4 connections, remove the
motherboard, remove the CD-driver in order to get at the hard disk, but
to my own surprise I managed to do all this fairly quickly and replaced
the hard disk by a 120 Gb Seagate Barracuda hard disk. I
put the iMac back together and started up from the OS 9 CD (last time I
forgot this and it is becoming fairly impossible to get a working
System9 defacto on 10.3). I opened DiskUtility and to my surprise the
utility found the new disk, so I managed to install everything properly.
I could even initialize and partition the disk (to run OS X on a first
generation iMac one needs to install it on a partition which is no
larger than 8 Gb) in two partitions (one 8Gb, the other the rest) and
installed System9 on the first partition. So far, so good but when I
restarted the iMac, a blinking question-mark appeared on the screen
indicating that it could not find the installed System9! Then I tried to
start-up from the 10.3-installation disk, started up the DiskUtility and
this time it found no hard disk at all. So I started up again from the
System9 CD and the two partitions appeared on my Desktop, seemingly in
perfect order. What was going on? There was an hard disk, I put System9
on one of its partitions but somehow it refused to find it, and starting
from the 10.3 CD it looked as if there was no hard disk whatsoever. If
you are knowledgeable, you know already where the problem was situated
but as I am more a software than a hardware guy I looked for similar
problems on the net and found an entry in which the solution was
obtained by installing System9 on the larger partition. So I tried this,
but again met the same problems.

So it must be a
hardware problem and I downloaded the product manual and began browsing through it until
I found one of these marvelous computer-terms : the master-slave
jumper settings. Who invents this kind of terminology? The
master-slave jumper… Anyway, here are the possibilities for a
Barracuda 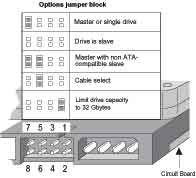 I
admit I didn’t look at the jumper-setting when I inserted the hard
disk. The previous two times it was not necessary and I assumed that the
default position would be the master-setting but wasn’t certain. Hence,
there was only one way to find out and that was redoing the whole
replacement-process… So, this morning I did this and found out that
the jumper-settings were set at Cable select which according to
Geert is the best setting for Windows-computers as
they then automatically decide whether to use the disk as master or
slave, so perhaps for Seagate there is some marketing logic in choosing
this as their default setting. Hence, I changed the setting to
master, quickly put back the iMac and in the end discovered that
I was left with two screws… As they must have been the screws
connecting the hard-disk cage to the motherboard I had little choice but
to redo the whole process a third time. Surprisingly, I began to like
the whole procedure, one should be forced as a computer-user to take
your computer apart a couple of time before working on it. Finally, I
tried to install OS X again, the DiskUtility recognized the two
partitions without any problem and the installation went smoothly.
Probably System9 can find a Cable-select connected hard disk, whereas OS
X cannot…