noncommutative geometry at the Lorentz center

This week i was at the conference Noncommutative Algebraic Geometry and its Applications to Physics at the Lorentz center in Leiden. 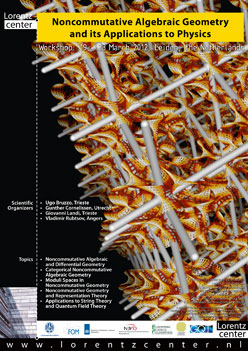 It was refreshing to go to a conference where i knew only a handful of people beforehand and where everything was organized to Oberwolfach perfection. Perhaps i’ll post someday on some of the (to me) more interesting talks.

Also interesting were some discussions about the Elsevier-boycot-fallout and proposals to go beyong that boycot and i will certainly post about that later. At the moment there is still an embargo on some information, but anticipate a statement from the editorial board of the journal of number theory soon…

I was asked to talk about “algebraic D-branes”, probably because it sounded like an appropriate topic for a conference on noncommutative algebraic geometry claiming to have connections with physics. I saw it as an excuse to promote the type of noncommutative geometry i like based on representation schemes.