Because we know already that any ‘point’ in Mumford’s drawing corresponds to a maximal ideal of the form $\mathfrak{m}=(p,f(x)) $ (see last time), we see that every point lies on precisely one of the set of all vertical coordinate axes corresponding to the prime numbers ${~\mathbb{V}((p)) = \mathbf{spec}(\mathbb{F}_p[x]) = \pi^{-1}((p))~} $. In particular, two different vertical lines do not intersect (or, in ringtheoretic lingo, the ‘vertical’ prime ideals $p\mathbb{Z}[x] $ and $q\mathbb{Z}[x] $ are comaximal for different prime numbers $p \not= q $). 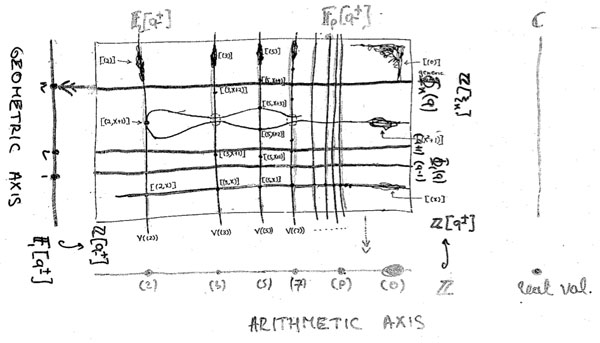 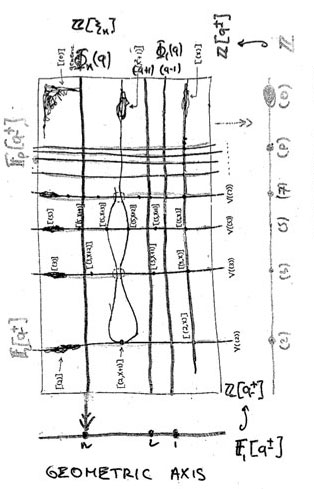 But then, what are the ‘points’ of this geometric axis and what are their fibers under this second projection?

We have seen above that the vertical coordinate line over the prime number $~(p) $ coincides with $\mathbf{spec}(\mathbb{F}_p[x]) $, the affine line over the finite field $\mathbb{F}_p $. But all of these different lines, for varying primes $p $, should project down onto the same geometric axis. Manin’s idea was to take therefore as the geometric axis the affine line $\mathbf{spec}(\mathbb{F}_1[x]) $, over the virtual field with one element, which should be thought of as being the limit of the finite fields $\mathbb{F}_p $ when $p $ goes to one!

How many points does $\mathbf{spec}(\mathbb{F}_1[x]) $ have? Over a virtual object one can postulate whatever one wants and hope for an a posteriori explanation. $\mathbb{F}_1 $-gurus tell us that there should be exactly one point of size n on the affine line over $\mathbb{F}_1 $, corresponding to the unique degree n field extension $\mathbb{F}_{1^n} $. However, it is difficult to explain this from the limiting perspective…

These fibers should correspond to ‘horizontal’ principal prime ideals of $\mathbb{Z}[x] $. Manin proposes to consider $\phi^{-1}(n) = \mathbb{V}((\Phi_n(x))) $ where $\Phi_n(x) $ is the n-th cyclotomic polynomial. The nice thing about this proposal is that all closed points of $\mathbf{spec}(\mathbb{Z}[x]) $ lie on one of these fibers!

Still, there is a noticeable difference between the two sets of coordinate lines. The vertical lines do not intersect meaning that $p\mathbb{Z}[x]+q\mathbb{Z}[x]=\mathbb{Z}[x] $ for different prime numbers p and q. However, in general the principal prime ideals corresponding to the horizontal lines $~(\Phi_n(x)) $ and $~(\Phi_m(x)) $ are not comaximal when $n \not= m $, that is, these ‘lines’ may have points in common! This will lead to an exotic new topology on the roots of unity… (to be continued).