Theorems have the tendency to pop into existence when you least expect them: taking a bath, during your sleep, dreaming away during a dull lecture, waiting for an airplane, bicycling, whatever.

One of the most famous (and useful) lemmas was dreamed up in the Parisian Gare du Nord station, during a conversation between Saunders Mac Lane (then in his mid 40ties) and a young Japanese mathematician, half his age, Nobuo Yoneda.

In the announcement of the death of his friend Yoneda on the catlist, the computer scientist Yoshiki Kinoshita writes:

“Prof. Yoneda was born on 28 March, 1930. He studied mathematics in the University of Tokyo; in the last year of his studies he followed the seminar of Prof. Shokiti Iyanaga, where he became interested in algebraic topology.

Soon after that (or maybe when he was still an undergraduate), Prof. Samuel Eilenberg visited Japan, and Yoneda traveled around Japan with him, as a translator and guide. At that time, he was exposed to the Cartan-Eilenberg book, which was still in galley form.

Later, he got a Fulbright scholarship and he visited Princeton, to study with Eilenberg. Those days, the Yen was still very weak, so even the Fulbright money was not enough to support even a modest living in U.S. Therefore, he worked as a proofreader at a European publisher (Elsevier? NorthHolland? maybe American), to earn money for the study in U.S. Even 25 years later, he seemed to be proud of his professional skill as a proofreader, which he gained then.

When he arrived in Princeton, Eilenberg had moved (sabbatical?) to France (or maybe, Eilenberg left US just after Yoneda’s arrival). So, Yoneda went to France a year later.

At that time, Saunders Mac Lane was visiting category theorists, apparently to obtain information to write his book (or former survey), and he met the young Yoneda, among others.

The interview started in a Cafe at Gare du Nord, and went on and on, and was continued even in Yoneda’s train until its departure. The contents of this talk was later named by Mac Lane as Yoneda lemma. So, the famous Yoneda lemma was born in Gare du Nord.

This must have been a good memory for Yoneda; I heard him tell this story many times. I do not know whether Mac Lane managed to leave the train before departure!”

In his obituary of Yoneda, Saunders Mac Lane also recalls the story as I learned from this tweet by Emily Riehl:

A personal account of the history of the Yoneda lemma, from Mathematica Japonica, found in Cabot science library. pic.twitter.com/Rc7NyboFPH

Emily also quotes part of the article in the section on Yoneda’s lemma in her excellent book Categories in Context.

At the time, Mac Lane was in his late 80ties and it is not clear whether this obituary is based on his own recollections or on the catlist-posting by Kinoshita.

“Yoneda enjoyed relating the story of the origins of this lemma, as follows.

He had guided Samuel Eilenberg during Eilenberg’s visit to Japan, and in the process learned homological algebra.

There he met Saunders Mac Lane. Mac Lane, then visiting Paris, was anxious to learn from Yoneda, and commenced an interview with Yoneda in a café at Gare du Nord.

The interview was continued on Yoneda’s train until its departure. In its course, Mac Lane learned about the lemma and subsequently baptized it.”

When was the Yoneda lemma born?

Remains the problem of putting an approximate date on this interview.

We also know that Mac Lane was a guest at the summer Bourbaki meeting which was held from august 17 till august 31, 1954 in Murols. 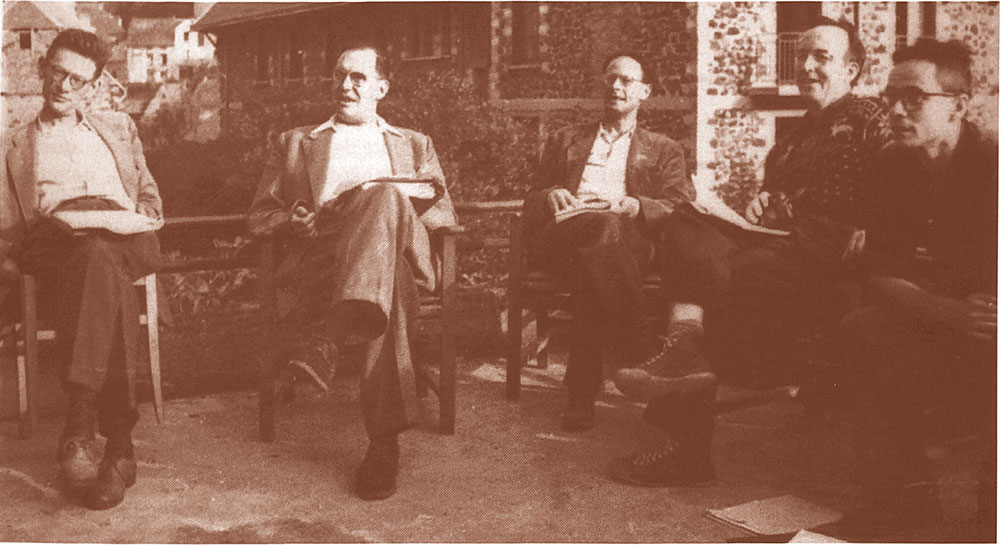 In this photograph taken at the meeting we see from left to right: Roger Godement, Jean Dieudonné, André Weil, Saunders Mac Lane and Jean-Pierre Serre.

Sadly, the Bourbaki-report (la Tribu) of the Murols-congress is not yet in the public domain (the pre-1954 reports can be found here), so it is a bit difficult to get hold of a full list of people present, or what exactly was discussed at that meeting.

Both Japanese mathematicians were on their way to the ICM in Amsterdam, which was held from september 2nd till september 9th 1954. Incidentally, Iyanaga chaired the invited address given by Andre Weil on wednesday 8th, titled “Abstract vs. classical algebraic geometry”.

Presumably, Yoneda was taking a train at the gare du Nord on his way to meat his adviser Iyanaga, to or from the Bourbaki meeting in Murols. My best guess is that the Yoneda lemma was born in the gare du Nord mid august 1954.

What was Mac Lane’s role at the Bourbaki Murols-congress?

According to him there had been a heated argument at a previous Bourbaki-congress on using the terminology “exact sequence”. Mac Lane took it upon himself to convince the Bourbaki-members to embrace the use of category theory, perhaps by explaining the brand new Yoneda-lemma.

He failed miserably. Here’s what Weil wrote to Chevalley about it:

“As you know, my honourable colleague Mac Lane supports the idea that every structural notion necessarily comes equipped with a notion of homomorphism. […] What on earth does he hope to deduce from this kind of considerations?”

Mac Lane attributes his failure to convince Bourbaki (or at least Weil) to “perhaps my command of the French language was inadequate to the task of persuasion”.

I find it striking that top-mathematicians such as Andre Weil failed to see the importance of morphisms between objects even as late as the mid 50ties.