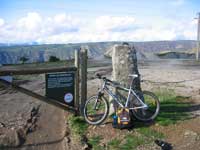 < Monday morning 7 am : the first gunshots can be heard in the distance. As the morning progresses they come closer and one can hear the hunting dogs clearly. A bit later four or five white mini-vans race up the road and turn to get to the ridge of the mountain, each having one or more dogs inside. Fifteen minutes later, we have eyesight contact with “les chasseurs” and the gunshots are so nearby that one might consider taking cover … A typical sunday in l'Ardeche-Cevenolle (I know, it is monday but yesterday the weather was just too bad and luckily for them it's a holiday today).

The weather is really nice and as every other
addicted cyclist I want to seize the opportunity because it is highly
uncertain that there will be another dry day this week. I would like
to do my favourite round-trip : to Dompnac, then Pourcharesse and back
via St-Melany.

If you ever did this you will never forget the
Dompnac-Pourcharesse part of the trip : it is merely 4km but if you
know how to read a map you will understand what I mean. Unfortunately,
afterwards one has to descend to St-Melany crossing the hunting
forests of the community and I have no desire to end up in the
statistics as one of the over 70 deads or seriously wounded by
hunting-accidents in France every year …

So, I did
choose the second hardest (but safer) route : first to descend to the
bridge below and then climb to Sablieres (takes 15 min), descend to
the Drobie (4 mins) and then the serious climb to the highest road in
the vicinity at Peyre (takes 45 min) and back. The first time I did
the 'col de Peyre' I had to stop three times but now I know
one has to divide the thrip into three parts : the first part,
climbing to 'Le Mas' is fairly hard and by far the longest
part, after Le Mas one has a km which isn't that steep and one
needs to use this to recuperate a bit because the last part, when you
have the ridge of the mountain in sight, has still some very steep
streches. As this was my first cycling trip in the mountains in over
two months it was still pretty hard and I was glad to see the stone
pillar indicating the summit.

There was hardly any traffic :
7 cars and just 1 other cyclist. But I came across quite a few hunting
dogs that had lost their group. At first it is a bit scary to be on a
lonely road facing an unescorted dog but these hunting dogs are
usually rather nice. On the final climb back I met one who just turned
round and followed me whole the way back to LeTravers and stayed there
for the rest of the afternoon.

Later on, another lost dog
turned up and decided to stay as well. The local etiquette then
demands that you phone the owner(s) (the telephone numbers are written
on a collar they wear), which we did later on when we thought 'la
chasse' was ended for the day and the dogs were picked up around 8
pm. Unknowingly we did exactly the right thing to get our yearly piece
of fresh wild boar (to be continued)…