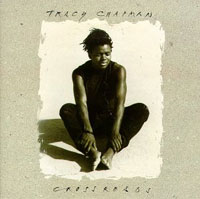 One way to increase the blogshare-value of this site might be to
give readers more of what they want. In fact, there is an excellent
guide for those who really want to increase traffic on their site
called 26
Steps to 15k a Day. A somewhat sobering suggestion is rule S :

But how do we know what
people want? Well, by paying attention to Google-referrals according
to rule U :

“The search engines will
tell you exactly what they want to be fed – listen closely, there is
gold in referral logs, it's just a matter of panning for
it.”

And what do these Google-referrals
show over the last couple of days? Well, here are the top recent
key-words given to Google to get here :

See a pattern? People love to hear right now about
the solution of the Jacobian conjecture in the plane by Carolyn Dean.
Fortunately, there are a couple of things more I can say about this
and it may take a while before you know why there is a photo of Tracy
Chapman next to this post…

First, it seems I only got
part of the Melvin Hochster
email. Here is the final part I was unaware of (thanks to not even wrong)

The proof
proceeds by starting with $f$ and $g$ that give
a
counterexample, and recursively constructing sequences of
elements and derivations with remarkable, intricate and
surprising relationships. Ultimately, a contradiction is
obtained by studying a sequence of positive integers associated
with the degrees of the elements constructed. One delicate
argument shows that the sequence is bounded. Another delicate
argument shows that it is not. Assuming the results described
above, the proof, while complicated, is remarkably self-contained
and can be understood with minimal background in algebra.

Speaking about the Jacobian
conjecture-post at not even wrong and
the discussion in the comments to it : there were a few instances I
really wanted to join in but I'll do it here. To begin, I was a
bit surprised of the implicit attack in the post

Dean hasn't published any papers in almost 15 years and is
nominally a lecturer in mathematics education at Michigan.

But this was immediately addressed and retracted in
the comments :

I don't know
anything about Carolyn Dean personally, just that one place on the
Michigan web-site refers to her as a “lecturer”, another
as a “visiting lecturer”. As I'm quite well aware from
personal experience, these kinds of titles can refer to all sorts of
different kinds of actual positions. So the title doesn't tell you
much, which is what I was awkwardly expressing.
Posted by Peter
at November 10, 2004 11:05 PM

Well, I know a few things
about Carolyn Dean personally, the most relevant being that she is a
very careful mathematician. I met her a while back (fall of 1985) at
UCSD where she was finishing (or had finished) her Ph.D. If Lance
Small's description of me would have been more reassuring, we
might even have ended up sharing an apartment (quod non). Instead I
ended up with Claudio
Procesi… Anyway, it was a very enjoyable month with a group
of young starting mathematicians and I fondly remember some
dinner-parties we organized. The last news I heard about Carolyn was
10 to 15 years ago in Oberwolfach when it was rumoured that she had
solved the Jacobian conjecture in the plane… As far as I recall,
the method sketched by Hochster in his email was also the one back
then. Unfortunately, at the time she still didn't have all pieces
in place and a gap was found (was it by Toby Stafford? or was it
Hochster?, I forgot). Anyway, she promptly acknowledged that there was
a gap.
At the time I was dubious about the approach (mostly
because I was secretly trying to solve it myself) but today my gut
feeling is that she really did solve it. In recent years there have
been significant advances in polynomial automorphisms (in particular
the tame-wild problem) and in the study of the Hilbert scheme of
points in the plane (which I always thought might lead to a proof) so
perhaps some of these recent results did give Carolyn clues to finish
off her old approach? I haven't seen one letter of the proof so
I'm merely speculating here. Anyway, Hochster's assurance that
the proof is correct is good enough for me right now.
Another
discussion in the NotEvenWrong-comments was on the issue that several
old problems were recently solved by people who devoted themselves for
several years solely to that problem and didn't join the parade of
dedicated follower of fashion-mathematicians.

It is remarkable that the last decade has seen great progress in
math (Wiles proving Fermat's Last Theorem, Perelman proving the
Poincare Conjecture, now Dean the Jacobian Conjecture), all achieved
by people willing to spend 7 years or more focusing on a single
problem. That's not the way academic research is generally
structured, if you want grants, etc. you should be working on much
shorter term projects. It's also remarkable that two out of three
of these people didn't have a regular tenured position.

I think particle theory should learn from this. If
some of the smarter people in the field would actually spend 7 years
concentrating on one problem, the field might actually go somewhere
instead of being dead in the water
Posted by Peter at November
13, 2004 08:56 AM

Here we come close to a major problem of
today's mathematics. I have the feeling that far too few
mathematicians dedicate themselves to problems in which they have a
personal interest, independent of what the rest of the world might
think about these problems. Far too many resort to doing trendy,
technical mathematics merely because it is approved by so called
'better' mathematicians. Mind you, I admit that I did fall in
that trap myself several times but lately I feel quite relieved to be
doing just the things I like to do no matter what the rest may think
about it. Here is a little bit of advice to some colleagues : get
yourself an iPod and take
some time to listen to songs like this one :

from Tracy Chapman's All
that you have is your soul