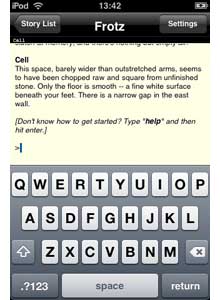 Interactive Fiction (IF) describes software simulating environments in which players use text commands to control characters and influence the environment. Works in this form can be understood as literary narratives and as computer games. In common usage, the word refers to text adventures, a type of adventure game with text-based input and output. As the text-input is minimal (most commands have 1 letter abbreviations), text-games are ideal to be played on the iTouch.

Luckily, one of the most popular IF-interfaces, Frotz, is ported to the iPhone/iTouch as iPhoneFrotz. The easiest way to install is just to install the Frotz package using Installer.app. Just install the “Community Sources” package, which contains the installer repository (which hosts Frotz as well as other games and utilities), then look for Frotz under the Games section.

A collection of 3 Zork-derivatives (although not the original Infocom titles) is also available in the “Zork Z-Code” package.

There are hundreds of Z-Code games, and no one is likely to package your favorites for easy installation by Installer.app. But the games can be downloaded and copied to the phone without too much trouble.

Z-Code games are typically have filenames ending in .z3, .z4, .z5 or .z8 (depending on version), although game files from original Infocom media end in .dat. These should be copied to the phone’s Frotz/Games folder (under /var/root/Media).

Here is a link to the The IF archive and an archive of all Z-games. Another interesting site is the Inform 7-site

Inform is a design system for interactive fiction, a new medium for writers which began with adventure games in the late 1970s and is now used for everything from literary narrative fiction through to plotless conceptual art, and plenty more adventure games too. Since its introduction in 1993, Inform has become a standard tool.
Three years in the making, Inform 7 is a radical reinvention of the way interactive fiction is designed, guided both by contemporary work in semantics and by the practical experience of some of the world’s best-known writers of IF.

In place of traditional computer programming, the design is built by writing natural English-language sentences:
– Martha is a woman in the Vineyard.
– The cask is either customs sealed, liable to tax or stolen goods.
– The prevailing wind is a direction that varies.
– The Old Ice House overlooks the Garden.
– A container is bursting if the total weight of things in it is greater than its breaking strain.
Inform’s power lie in its ability to describe: to lay down general rules about “closed doors”, or “bursting containers”, or “unmarried men liked by Martha”. At its best, expressing IF in natural language results in source text which is not only quick to write, but very often works first time, and is exceptionally readable.

Inform 7 is available for most platforms and can be downloaded here.