In my geometry 101 course I'm doing the rotation-symmetry groups
of the Platonic solids right now. This goes slightly slower than
expected as it turned out that some secondary schools no longer give a
formal definition of what a group is. So, a lot of time is taken up
explaining permutations and their properties as I want to view the
Platonic groups as subgroups of the permutation groups on the vertices.
To prove that the _tetrahedral group_ is isomorphic to $A_4$ was pretty
straigthforward and I'm half way through proving that the
_octahedral group_ is just $S_4$ (using the duality of the octahedron
with the cube and using the $4$ body diagonals of the cube).
Next
week I have to show that the _icosahedral group_ is isomorphic to $A_5$
which is a lot harder. The usual proof (that is, using the duality
between the icosahedron and the dodecahedron and using the $5$ cubes
contained in the dodecahedron, one for each of the diagonals of a face)
involves too much calculations to do in one hour. An alternative road is
to view the icosahedral group as a subgroup of $S_6$ (using the main
diagonals on the $12$ vertices of the icosahedron) and identifying this
subgroup as $A_5$. A neat exposition of this approach is given by John Baez in his
post Some thoughts on
the number $6$. (He also has another post on the icosahedral group
in his Week 79's
finds in mathematical physics). 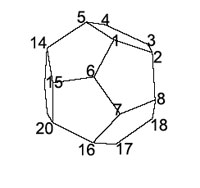