hold on to those PPC macs 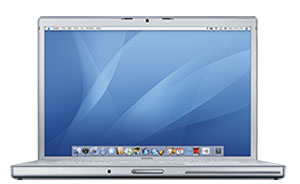 On my
return from O a brand new 15inch MacBook Pro lie waiting in
my office. By that evening I had wrecked the system to the extend that I
could no longer login and had to reinstall from scratch… I was
about to trow it away but tried it out for a few more days and
eventually began to understand it a bit. In short : the new Intel Macs
promise to be really good hardware, unfortunately some essential
software lags behind, so if you want a stress-free Mac-life… hold
on to your PPC mac a few months longer. If you are impatient and want to
learn some of the pitfalls, read on… I’m ashamed to admit this
but the first thing I did on my new machine was to create a WindowsXP
partition… BootCamp does what it
promises to do and is extremely easy to use once you can start it. The
installation guide does tell that you jave to update your systems
software and firmware, but that’s what you do anyway after a new
install, right? Wrong! You update the software but _not_ the
firmware and it took me some time to come to this simple conclusion. How
to check whether your firmware is up to date? Go under the apple to
‘About this Mac’, click on ‘More Info’ and look at your
‘ Boot ROM Version:’ if it says MBP11.0055.B03 you’re ok, if not
you have to install the newest firmware which is a slightly terrifying experience
with soundsignals included, but works fine. Once this is done, you can
start BootCamp and have a Windows partition in no time. At a certain
moment you have to decide on possible partition-formats for the Windows
part, I choose the ‘Fat’ option to be able to swap files across
the partitions. Next, what does a mathematician wants from a
computer? To run LaTeX! I’ve installed LaTeX on more Macs than I
remember so I continued on automatic pilot, getting Gerben Wierda’s i-Installer, startd it up and
… my machine froze! Nothing, not even a ‘Force Quit’, was
possible any more. Today, there is a clear warning message as the
i-Installer page (i don’t recall seeing it there last week, but then it
is a recent problem. Things broke down on May 11th when I was still in
O)

WARNING: i-Installer on Mac OS X 10.4.6 may trigger
the Mac OS X 10.4.6 bug that partially freezes your system. May 2006:
i-Installer did work perfectly on Mac OS X 10.4.3, the version of Tiger
that was shipped with the Developer Transition Kit. When the first intel
machines were sold by Apple, these contained 10.4.4 and on that system,
i-Installer experiences troubles because of problems deep inside Apple’s
Frameworks. The only way I could solve this was to make i-Installer a
PowerPC-only application again and ask for Apple’s help to determine
where the problem was. So far, this has been s slow process without any
noticeable results. The PowerPC-only version worked fine until Apple
released 10.4.6 and especially the latest upgrades (Security Upgrade
2006-003 and maybe QuickTime). As I am writing this (May 21) a
completely updated Mac OS X 10.4.6 on intel will partially freeze in
various circumstances, triggered by various applications (MatLab,
i-Installer, etc.). Sadly, the just released MacBook (successor of the
iBook) is shipping with this broken version of the OS. Hence, there is
now no i-Installer that reliably works on intel machines with recent OS
versions and even worse, i-Installer may trigger a nasty bug in recent
Mac OS X intel versions.

Scary isn’t it? You have a
brand new expensive machine but cannot typeset a single paper…
Fortunately, the TeXShop
page not only mentions the problem, but also a workaround

On May 11, 2006, Apple provided security updates for Mac OS
X. These updates broke i-Installer on Intel (it continues to work on
PowerPC). If you have an Intel Mac and you have installed this update,
you must use the MacTeX install package until this problem is fixed.
Once TeX is installed, it works fine.

The first
assertion is true : installing the MacTeX package gives you a working
TeX-installation, with TeXShop, Excalibur, BibTeX and i-Installer coming
for free. But don’t think the i-Installer problem has been solved, I
tried it out and voila another ice-age… So far so good but
sometimes we like to compute things, don’t we? Like some commutative
algebra or algebraic geometry things via Singular? I remembered to
install this via the Fink
project but already their news-items are not very promissing

A preliminary version of Fink for the Intel architecture is
now ready. No binary packages are available, and things are still rough
around the edges, but it should be usable if you are patient! To
install it, you need to install the XCode compiler and SDK packages (at
minimum). Then you need to get the file fink-0.24.14.tar.gz from the
Sourceforge file release page for Fink, expand the file, and run the
command ./bootstrap.sh . At the end of the bootstrap process, run fink
selfupdate and you’ll get the currently available packages. At last
check, there were about 1750 packages in the “stable” tree,
but about 150 of those did not build. When things are truly stable,
another annoucement will be made here.

The normal
FinkCommander didn’t work either but then I found a version which does
at Charles K. C. Lo’s
Homepage. I verified it by having the fink-TeTeX package installed
(which works!) and then I wanted to do a Singular-install… Things
seemed to start off well (once you change the freferences to install
also unstable packages) but then the installation procedure halted with
the message

Failed: phase compiling: singular-3.0.1-1013
failed Before reporting any errors, please run “fink
selfupdate” and try again. If you continue to have issues, please
check to see if the FAQ on fink’s website solves the problem. If not,
ask on the fink-users or fink-beginners mailing lists. As a last
resort, you can try e-mailing the maintainer directly: Michael
Brickenstein bricken at mathematik.uni-kl.de Note that many
fink package maintainers do not (yet) have access to OS X on Intel
hardware, so you may have better luck on the mailing lists.

So, maybe I should just donate my MacBook Pro to the
Fink-project? A similar problem with installing Maxima… I didn’t
even try out GAP via Fink but went for a niversal Unix-installation for
GAP and this WORKED! even with all packages and tables and the whole I
dont know what. Thank you, GAPpers, perhaps all algebraists on Intel
Macs should shift to GroupTheory? But hey! My Intel-Mac does have a
WindowsXP partition… So, I did a binary Windows install of
Singular and Maxima and both work without problems. Still, it is a
strange situation. Fortunately, I did resolve these issues but that will
have to wait until tomorrow…