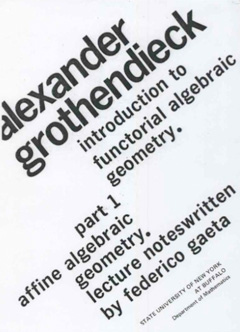 The Grothendieck circle is a great resource to find published as well as unpublished texts by Alexander Grothendieck.

One of the text I was unaware of is his Introduction to Functorial Algebraic Geometry, a set of notes written up by Federico Gaeta based on tape-recordings (!) of an 100-hour course given by Grothendieck in Buffalo, NY in the summer of 1973. The Grothendieck-circle page adds this funny one-line comment: “These are not based on prenotes by Grothendieck and to some extent represent Gaeta’s personal understanding of what was taught there.”.

It is a bit strange that this text is listed among Grothendieck’s unpublished texts as Gaeta writes on page 3 : “GROTHENDIECK himself does not assume any responsability for the publication of these notes”. This is just one of many ‘bracketed’ comments by Gaeta which make these notes a great read. On page 5 he adds :

“Today for many collegues, GROTHENDIECK’s Algebraic Geometry looks like one of the most abstract and unapplicable products of current mathematical thought. This prejudice caused har(‘m’ or ‘ess’, unreadable) even before the students of mathematics within the U.S. were worried about the scarcity of academic positions… . If they ever heard GROTHENDIECK deliver one of his survival talks against modern Science, research, technology, etc., … their worries might become unbearable.”

Together with Claude Chevalley and Pierre Cartier, Grothendieck was an editor of “Survivre et Vivre“, the bulletin of the ecological association of the same name which appeared at regular intervals from 1970 to 1973. Scans of all but two of these volumes can be found here. All of this has a strong 60ties feel to it, as does Gaeta’s decription of Grothendieck : “He is a very liberal man and in spite of that he allowed us to use plenty of tape recorders!” (p.5).

On page 11, Gaeta records a little Q&A exchange from one of these legendary ‘survival talks’ by Grothendieck :

Question : We understand your worries about expert knowledge,… by the way, if we try to explain to a layman what algebraic geometry is it seems to me that the title of the old book of ENRIQUES, “Geometrical theory of equations”, is still adequate. What do you think?

GROTHENDIECK : Yes, but your ‘layman’ should know what a sustem of algebraic equations is. This would cost years of study to PLATO.

Question : It should be nice to have a little faith that after two thousand years every good high school graduate can understand what an affine scheme is … What do you think?