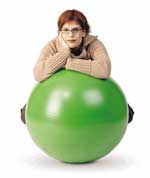 One week to go before the regional and European elections and tension is rising. For me there are two crucial questions : will a racist party get more than 20% of the votes? and will the green party get over the electoral threshold of 5%? If you are not Flemish both probably require some explanation.

A month ago, the extreme right party ‘Vlaams Blok’ was convicted in court for racism and discrimination. They can still participate in the elections because they appealed and Belgian courts are extremely slow. Many people think that this conviction only applies to the party and not to people voting for it. To me, anyone still voting for a party convicted for racism says “I don’t care about society, values and the law!”

Sadly, I wouldn’t be surprised if more than 20% of the electorate will broadcast that message next week. But let us remain optimistic and look at the Vlaams Blog weblogs and their posters ridiculing the Vlaams Blok propaganda.

Then there is the Flemish green party groen!.

Usually they got between 5% and 8% of the votes with one exception in 1999 when they obtained 11%. In 1999 they went into government and among major environmental accomplishments they also voted silly laws such as introducing an electoral threshold of 5%. In last year’s elections they were the first party to be hurt by this when they dived under 4% and had not a single member of parliament left.

I have voted green at every election with one exception : early 80ties the Americans wanted to install cruise missiles in Belgium and with my twenties-naivety I thought to be able to avoid this by casting a strategic (socialist) vote. A traumatic experience because soon afterwards the missiles were flown in…

To me this partly explains the reluctance of groen! to form an alliance with the socialist party as (sadly enough) groen! is run by people of my generation (or older).

Still, in the long run there is no alternative but to form one progressive green-red party. So, I hope that, whatever happens, after the elections competent youngsters such as Tinne Van der Straeten and Els Keytsman will take control of the green party and find equally driven people in the socialist party (not entirely trivial as they seem to specialize in babes whose major accomplishment is the introduction of the sleeveless shirt ministerial look).

In case you wonder : I will vote Tinne Van der Straeten for Europe and Lieve Stallaert for the Flemish
parliament.