In April my Google+ account will disappear. Here I collect some G+ posts, in chronological order, having a common theme. Today, math-history (jokes and puns included).

Was looking up pictures of mathematicians from the past and couldn’t help thinking ‘Hey, I’ve seen this face before…’ 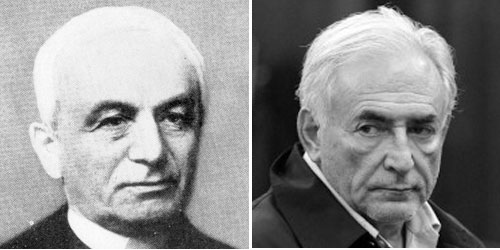 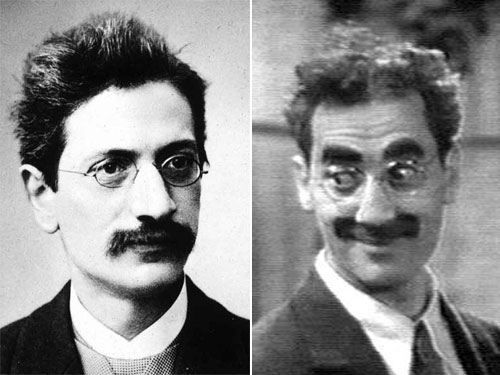 (Noether-Knaben in German) were the group of (then) young algebra students around Emmy Noether in the early 1930’s. Actually two of them were girls (Grete Hermann and Olga Taussky).

The picture is taken from a talk Peter Roquette gave in Heidelberg. Slides of this talk are now available from his website. 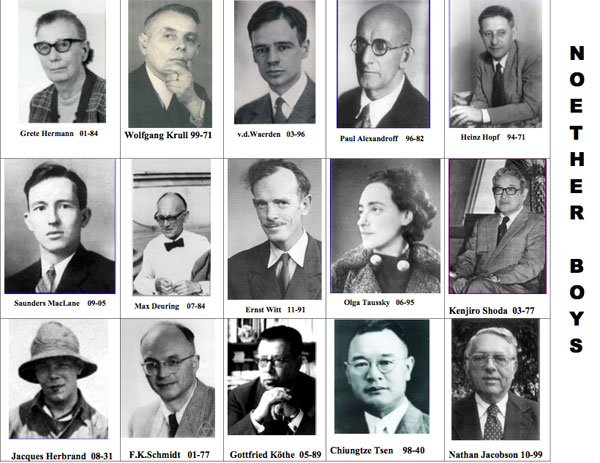 In 1931 Jacques Herbrand (one of the ‘Noether boys’) fell to his death while mountain-climbing in the Massif des Écrins (France). He was just 23, but already considered one of the greatest minds of his generation.

He introduced the notion of recursive functions while proving “On the consistency of arithmetic”. In several texts on Herbrand one finds this intriguing quote by Chevalley (one of the first generation Bourbakis):

Can anyone tell me the underlying story?

a 3yr old post on Scottish vs. Platonic Solids did hit Reddit/pics

I’d better point them to the latest on this then.

The return of the Scottish solids

+Pieter Belmans (re)discovered a proto-drawing of Mumford’s iconic map of Spec(Z[x]) in his ‘red book’. 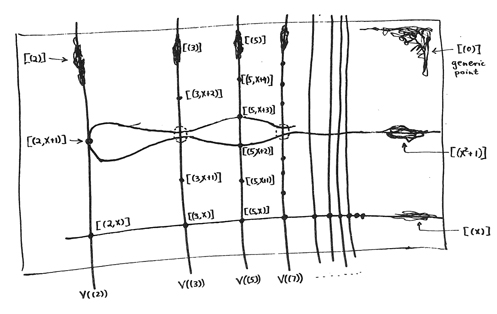 The proto-pic is taken from Mumford’s ‘Lectures on curves on an algebraic surface’ p.28 and tries to depict the integral projective line. The set-up is rather classical (focussing on points of different codimension) whereas the red-book picture is more daring and has been an inspiration for generations of arithmetical geometers. 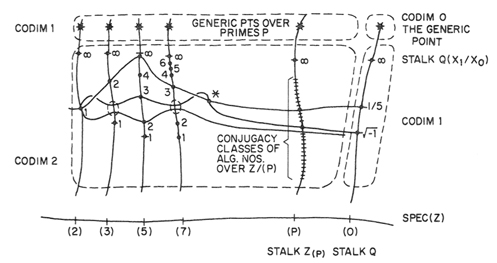 Still there’s the issue of dating these maps.

Though I’d love to hear more precise dates, I’m convinced they are about right. In the ‘Curves’-book’s preface Mumford apologises to ‘any reader who, hoping that he would find here in these 60 odd pages an easy and concise introduction to schemes, instead becomes hopelessly lost in a maze of unproven assertions and undeveloped suggestions.’ and he stresses by underlining ‘From lecture 12 on, we have proven everything that we need’.

So, clearly the RedBook was written later, and as he has written in-between his master-piece GIT i’d say Mumford’s own dating is about right.

Still, it is not a completely vacuous dispute as the ‘Curves’ book (supposedly from 1964 or earlier) contains a marvelous appendix by George Bergman on the Witt ring which would predate Cartier’s account…

“I was a graduate student taking the course Mumford gave on curves and surfaces; but algebraic geometry was not my main field, and soon into the course I was completely lost.  Then Mumford started a self-contained topic that he was going to weave in — ring schemes — and it made clear and beautiful sense to me; and when he constructed the Witt vector ring scheme, I thought about it, saw a nicer way to do it, talked with him about it and with his permission presented it to the class, and eventually wrote it up as a chapter in his course notes.
I think that my main substantive contribution was the tying together of the various prime-specific ring schemes into one big ring scheme that works for all primes.  The development in terms of power series may or may not have originated with me; I just don’t remember.”

which sounds very Bergmannian to me.

Anyway I’d love to know more about the dating of the ‘Curves’ book and (even more) the first year Mumford delivered his Red-Book-Lectures (my guess 1965-66). Thanks.
Pieter maintains an “Atlas of this picture” here

The wikipedia-entry linking Andre Martineau to the origin of the scheme-concept appears to rely on footnote 29 of Cartier’s ‘A mad day’s work, from Grothendieck to Connes and Kontsevich’ which reads:

“Serre first considered the set of maximal ideals of a commutative ring A subject to certain restrictions. Martineau then remarked to him that his arguments remained valid for any commutative ring, provided one takes all prime ideals instead of only maximal ideals. I then proposed a definition of schemes equivalent to the definition of Grothendieck. In my dissertation I confined myself to a framework similar to that of Chevalley, so as to avoid an excessively long exposition of the preliminaries!” 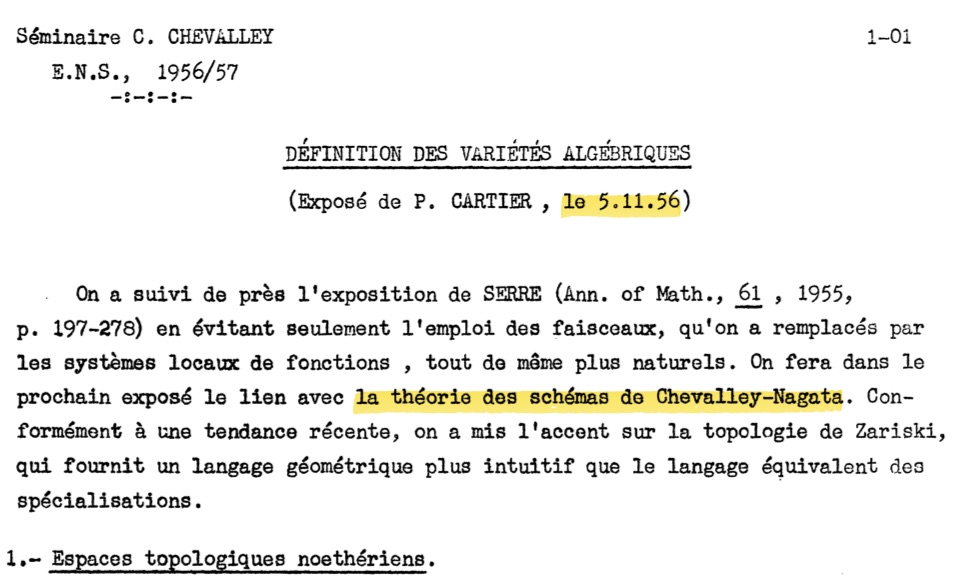 In the 1956/57 Chevalley seminar Cartier gave the first two talks and in the first one, on november 5th 1956, one finds the first published use of the word ‘scheme’, which he refers to as ‘schemes in the sense of Chevalley-Nagata’. On page 9 of that talk he introduces the prime spectrum with its Zariski topology.

In the second talk a week later, on november 12th, he then gives the general definition of a scheme (as we know it, by gluing together affine schemes and including the stalks).

BUT, he did all of this ‘only’ for affine rings over a field, ‘to avoid an excessively long exposition of the preliminaries’…

Grothendieck then made the quantum-leap to general commutative rings.

Claude Chevalley gave already two talks on ‘Schemes’ in the Cartan-Chevalley seminar of 1955/56, the first one on december 12th 1955, the other a week later. 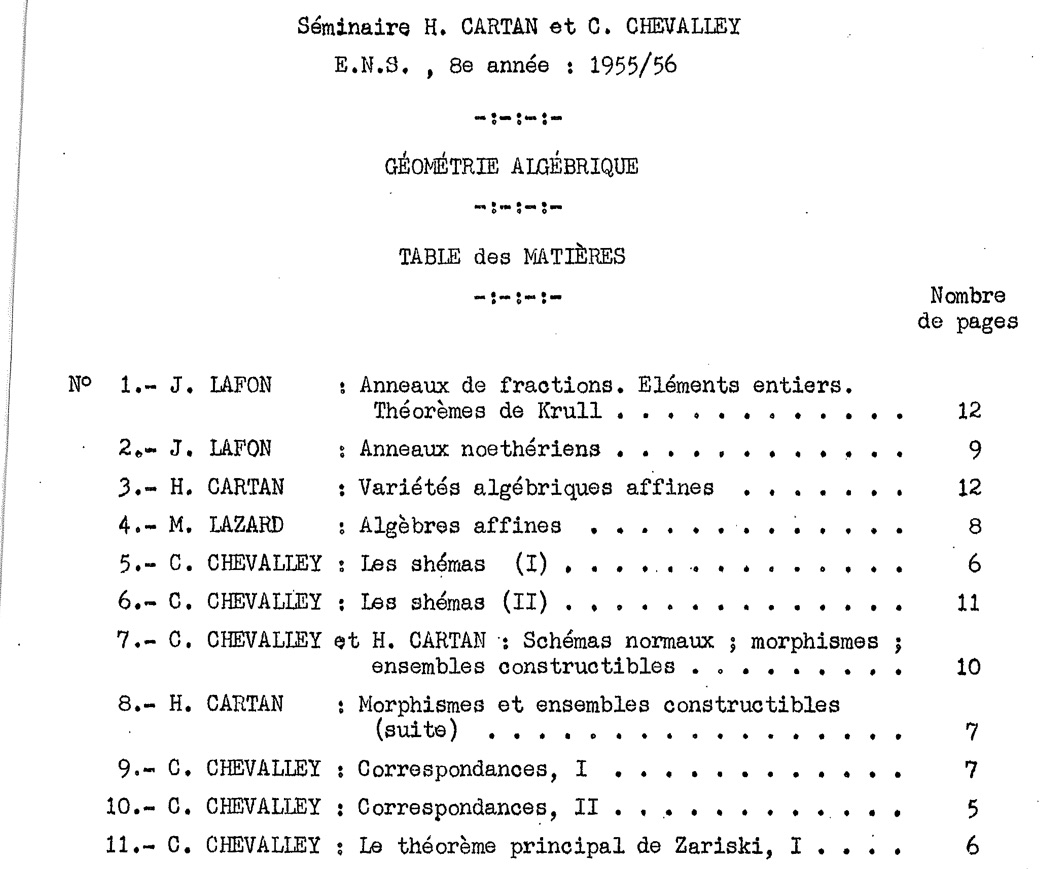 Chevalley only considers integral schemes, of finite type over a field (Cartier drops the integrality condition on november 5th 1956, a bit later Grothendieck will drop all restrictions).

Grothendieck’s quote “But then, what are schemes?” uttered in a Parisian Cafe must date from that period. Possibly Cartier explained the concept to him. In a letter to Serre, dated december 15th 1955, Grothendieck is quite impressed with Cartier:

“Cartier seems to be an amazing person, especially his speed of understanding, and the incredible amount of things he reads and grasps; I really have the impression that in a few years he will be where you are now. I am exploiting him most profitably.” 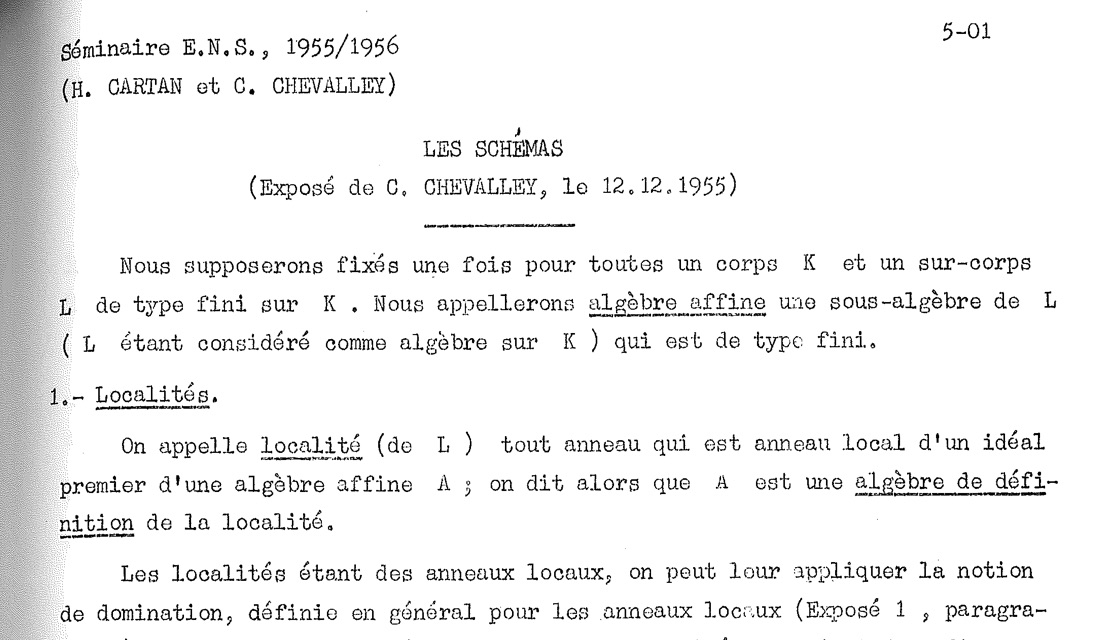 David Mumford on the Italian school of Geometry 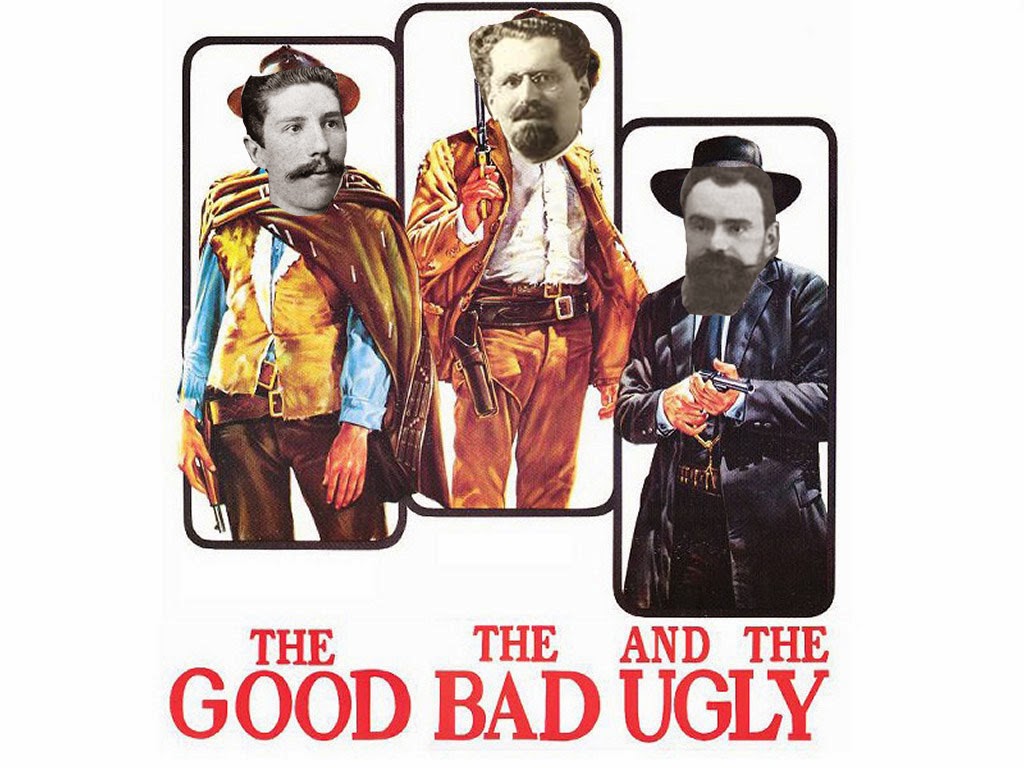 “The best known case is the Italian school of algebraic geometry, which produced extremely good and deep results for some 50 years, but then went to pieces.
There are 3 key names here — Castelnuovo, Enriques and Severi.

C was earliest and was totally rigorous, a splendid mathematician.

E came next and, as far as I know, never published anything that was false, though he openly acknowledged that some of his proofs didn’t cover every possible case (there were often special highly singular cases which later turned out to be central to understanding a situation).  He used to talk about posing “critical doubts”. He had his own standards and was happy to reexamine a “proof” and make it more nearly complete.

Unfortunately Severi, the last in the line, a fascist with a dictatorial temperament, really killed the whole school because, although he started off with brilliant and correct discoveries, later published books full of garbage (this was in the 30’s and 40’s). The rest of the world was uncertain what had been proven and what not. He gave a keynote speech at the first Int Congress after the war in 1950, but his mistakes were becoming clearer and clearer.

It took the efforts of 2 great men, Zariski and Weil, to clean up the mess in the 40’s and 50’s although dredging this morass for its correct results continues occasionally to this day.” (David Mumford)

After more than 70 years, credit is finally given to a fine, inspiring and courageous Basque algebraic geometer.

One of the better held secrets, known only to the first generation Bourbakistas, was released to the general public in april 2012 at the WAGS Spring 2012, the Western Algebraic Geometry Symposium, held at the University of Washington.

Hirune Mendebaldeko was a Basque pacifist, a contemporary of Nicholas Bourbaki, whom she met in Paris while there studying algebraic geometry. They were rumored to be carrying on a secret affair, with not infrequent trysts in the Pyrenees. Whenever they appeared together in public, however, there was no indication of any personal relationship. 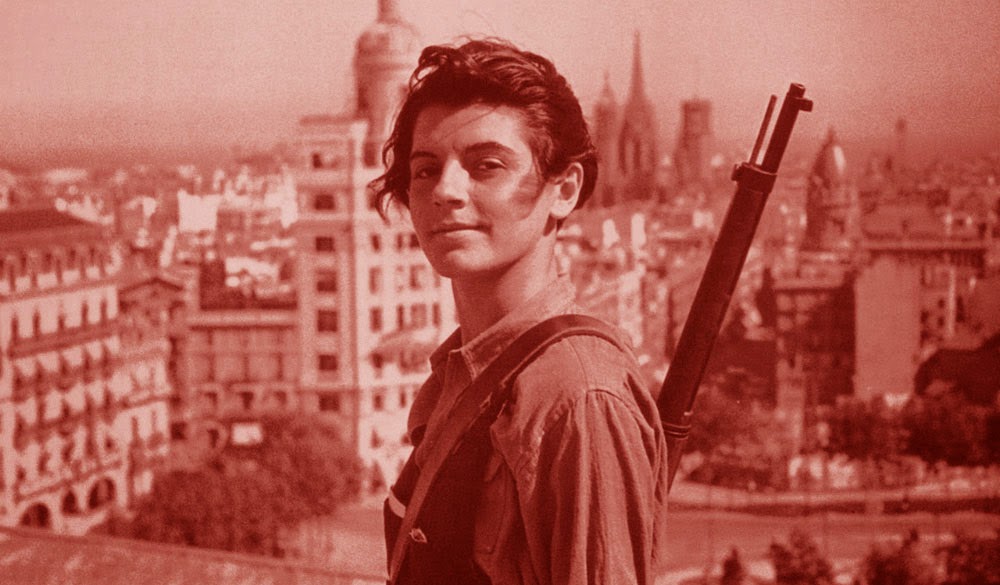 From the comments, by +Sandor Kovacs:

+Chris Brav Chris, just between us: the whole thing is a joke. I just tried to put yet another twist on it. Also, until now we have never admitted that it is, so please don’t tell anyone. 😉

The explanation at the end of +lieven lebruyn’s blog post was indeed the original motivation for the name. We were starting a new “named” lecture series as part of WAGS and wanted to name it after someone not obvious. Basque is a language not related to any other. It seemed a good idea to use that, so very few people would know the meaning of any particular word.

Then we tried all the words in WAGS, but the other three were actually very similar to the English/etc versions. The first name was chosen by vibe. Then we decided that we needed a bio for our distinguished namesake and the connection to Bourbaki presented itself for various reasons that you can guess. But we wanted a pacifist and it seemed a nice contrast to Bourbaki. So Hirune was born and we were hoping that one day she would gain prominence in the world. Finally, it happened. 🙂

the state of European mathematics in 1927

This map, from the Rockefeller foundation, gives us the top 3 mathematical institutes in 1927 : Goettingen, Paris and … Rome.
The pie-charts per university show that algebra was a marginal topic then (wondering how a similar map might look today). 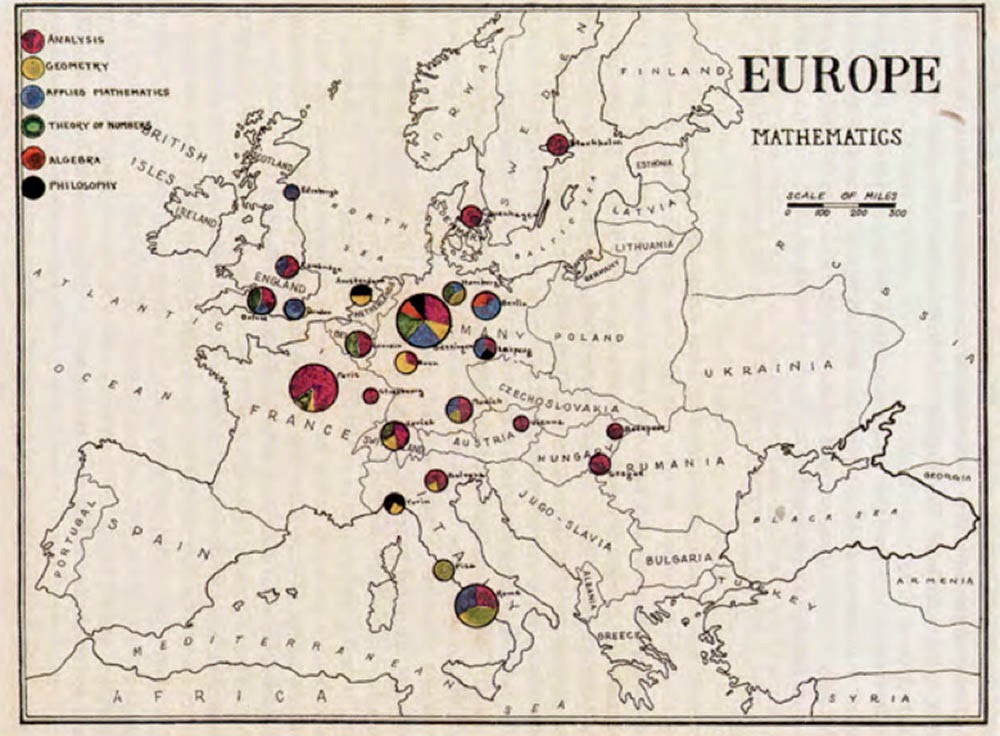 Did Chevalley invent the Zariski topology?

In his inaugural lecture at #ToposIHES Pierre Cartier stated (around 44m11s):
“By the way, Zariski topology, as we know it today, was not what Zariski invented. He invented a variant of that, a topology on the set of all valuation rings of a given field, which is not exactly the same thing. As for the Zariski topology, the rumour is that it was invented by Chevalley in a seminar given by Zariski, but I have no real proof.”
Do you know more about this?

Btw. the full lecture of Cartier (mostly on sheaf theory) is not on the IHES YouTube channel, but on the channel of +Laurence Honnorat.

The IHES did begin to upload videos of the remaining plenary talks
here (so far, the wednesday talks are available).