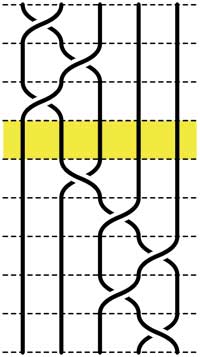 Recall that an n-braid consists of n strictly descending elastic strings connecting n inputs at the top (named 1,2,…,n) to n outputs at the bottom (labeled 1,2,…,n) upto isotopy (meaning that we may pull and rearrange the strings in any way possible within 3-dimensional space). We can always change the braid slightly such that we can divide the interval between in- and output in a number of subintervals such that in each of those there is at most one crossing.

In this way (and using our claim that there can be at most 1 crossing in each subinterval) we can write any n-braid as a word in the generators $\sigma_i $ (with $1 \leq i < n $) being the overcrossing between inputs i and i+1. Observe that the undercrossing is then the inverse $\sigma_i^{-1} $. For example, the braid on the left corresponds to the word

Clearly there are relations among words in the generators. The easiest one we have already used implicitly namely that $\sigma_i.\sigma_i^{-1} $ is the trivial braid. Emil Artin proved in the 1930-ies that all such relations are consequences of two sets of ‘obvious’ relations. The first being commutation relations between crossings when the strings are far enough from each other. That is we have 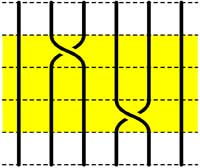 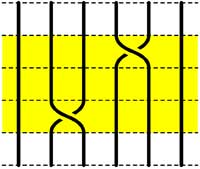 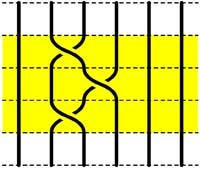 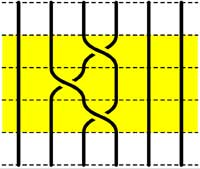 Starting with the 5-braid at the top, we can use these relations to reduce it to a simpler form. At each step we have outlined to region where the relations are applied 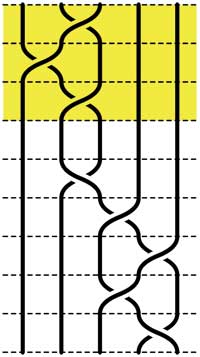 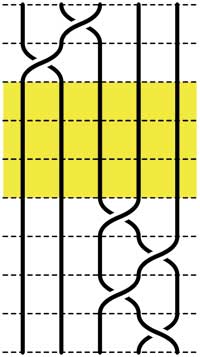 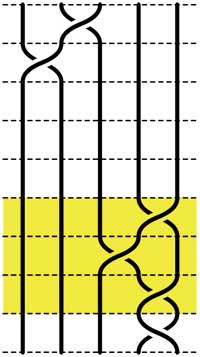 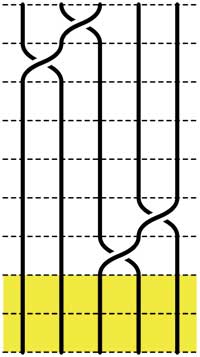 Tracing a string from an input to an output assigns to an n-braid a permutation on n letters. In the above example, the permutation is $~(1,2,4,5,3) $. As this permutation doesn’t change under applying basic reduction, this gives a group-morphism

from the braid group on n strings $\mathbb{B}_n $ to the symmetric group. We have seen before that the symmetric group $S_n $ has a F-un interpretation as the linear group $GL_n(\mathbb{F}_1) $ over the field with one element. Hence, we can ask whether there is also a F-un interpretation of the n-string braid group and of the above group-morphism.

And, now that we know the basics of absolute linear algebra, we can give an absolute braid-group representation

and it is easy to see that these matrices do indeed satisfy Artin’s defining relations for $\mathbb{B}_n $.