Can I
suggest this addition to mathematical terminology?

doing a Perelman = making a voluntary retreat from the
math circuit to preserve one’s own well-being (either mental,
physical, scientific …).

As in : “I’m doing a
Perelman ever since that Oberwolfach meeting in 2002″

I
guess by now everyone has read the New Yorker-article by Sylvia Nasar
and David Gruber
Manifold Destiny. A legendary problem and the battle over who solved
it. summarized in the accompanying drawing 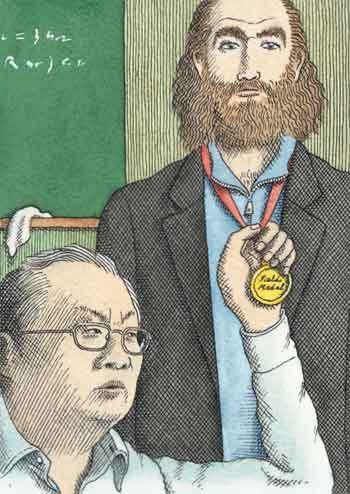 In
case you never made it to the last page, here is the crucial paragraph

Perelman repeatedly said that he had retired
from the mathematics community and no longer considered himself a
professional mathematician. He mentioned a dispute that he had had years
earlier with a collaborator over how to credit the author of a
particular proof, and said that he was dismayed by the
discipline’s lax ethics.

“It is not people who
break ethical standards who are regarded as aliens,” he said.
“it is people like me who are isolated.”

We asked
him whether he had read Cao and Zhu’s paper. “It is not
clear to me what new contribution did they make,” he said.
“Apparently, Zhu did not quite understand the argument and
reworked it.”