In another post we introduced
Minkowski’s question-mark function, aka the devil’s straircase 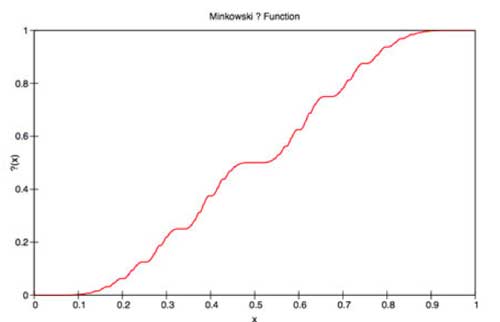 and related it to
Conways game of _contorted fractions_. Side remark : over at Good Math, Bad Math Mark Chu-Carroll is running
a mini-series on numbers&games, so far there is a post on surreal numbers,
surreal arithmetic and the connection with
games but
probably this series will go on for some time.

About a year ago I had
an email-exchange with Linas Vepstas because I was
intrigued by one of his online publications linking the fractal
symmetries of the devil’s staircase to the modular group. Unfortunately,
his paper contained some inaccuracies and I’m happy some of my comments
made it into his rewrite The Minkowski question mark, GL(2,Z) and the
modular group. Still, several
mistakes remain so read this paper only modulo his own caveat

XXXX This paper is unfinished. Although this version
corrects a number of serious errors in the previous drafts, it is still
misleading and confusing in many ways. The second half, in particular
must surely contain errors and mis-statements! Caveat emptor! XXXX

For example, on page 15 of the march 24-version he claims
that the third braid group $B_3 \simeq SL_2(\mathbb{Z}) $ which
would make life, mathematics and even physics a lot easier, but
unfortunately is not true. Recall that Artin’s defining relation for the
3-string braid group is $\sigma_1 \sigma_2 \sigma_1 = \sigma_2
\sigma_1 \sigma_2 $ as can be seen because the 3-strings below can
be transformed into each other 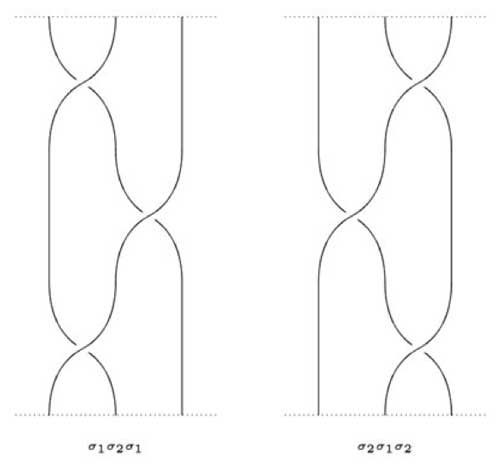 But from this
relation it follows that $c=(\sigma_1 \sigma_2 \sigma_1)^2 $ is
a central element in $B_3 $ and it is not difficult to verify
that indeed $B_3/ \langle c \rangle \simeq PSL_2(\mathbb{Z}) $
and $B_3/ \langle c^2 \rangle \simeq SL_2(\mathbb{Z}) $ An easy
way to see that the third braid group and the modular group are quite
different is to look at their one-dimensional representations. Any
group-map $B_3 \rightarrow \mathbb{C}^_ $ is determined by
non-zero complex numbers x and y satisfying $x^2y=y^2x $ so are
parametrized by the torus $\mathbb{C}^_ $ whereas there are only
6 one-dimensional representations of $PSL_2(\mathbb{Z}) = C_2 \ast
C_3 $ (and similarly, there are only 12 one-dimensional
$SL_2(\mathbb{Z}) $-representations). Btw. for those still
interested in noncommutative geometry : $(P)SL_2(\mathbb{Z}) $
are noncommutative manifolds whereas $B_3 $ is definitely
singular, if I ever get to the definitions of all of this… Still,
there is a gem contained in Linas’ paper and here’s my reading of it :
the fractal symmetries of the devil’s staircase form a generating
sub-semigroup $C_2 \ast \mathbb{N} $ of
$GL_2(\mathbb{Z}) $ . To begin, let us recall that the
question-mark function is defined in terms of continued fraction
expressions. So, what group of symmetries may be around the corner?
Well, if $a = \langle a_0;a_1,a_2,\ldots \rangle $ is the
continued fraction of a (see this
post for details) then if we
look at the n-th approximations $\frac{p_n}{q_n} $ (that is, the
rational numbers obtained after breaking off the continued fraction at
step n) it is failrly easy to show that $\begin{bmatrix} p_n &
p_{n-1} \\ q_n & q_{n-1} \end{bmatrix} \in GL_2(\mathbb{Z}) $ and
recall (again) that this group acts on
$\mathbb{P}^1_{\mathbb{C}} $ via Moebius transformations
$\begin{bmatrix} a & b \ c & d \end{bmatrix} $ via $z
\mapsto \frac{az+b}{cz+d} $ One of the symmetries is easy to spot
(reflexion along the 1/2-axis)